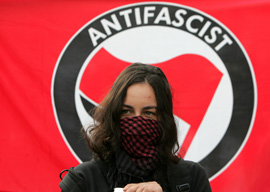 “The Barbarian cannot make … he can befog and destroy but … he cannot sustain; and of every Barbarian in the decline or peril of every civilization exactly that has been true.”

Hilaire Belloc’s depiction of the barbarian is recalled to mind as the statues honoring the history and heroes of the Republic and of the West continue to be vandalized and smashed.

A week ago, the statue of missionary and Catholic Saint Fr. Junipero Serra was beheaded at the Santa Barbara Mission he founded. A century-old Columbus statue in Central Park was defaced and spray-painted with: “Hate will not be tolerated.”

Baltimore’s monument to Francis Scott Key, who observed the bombardment of Fort McHenry on a British warship late in the War of 1812 and was inspired to write “The Star-Spangled Banner,” was covered in red paint. “Racist anthem” was written across it.

In Berkeley, home of the Free Speech Movement, the university last week had to spend $600,000 to protect an invited speaker of the college Republicans from being assaulted.

But St. Louis was where the real action was. Friday, a mob hurled rocks and bottles injuring 11 cops, leaving one with a broken jaw. They smashed windows at the mayor’s residence and marched miles to the Central West End to berate diners on patios of restaurants with the menacing chant: “Off the sidewalk. Into the street.”

Saturday, the mob invaded and shut down a suburban mall, and then smashed windows across a nightlife district.

“The left has been marinated in an ideology where the enemy is always to the right.”

The protesters rationale: rage at a not-guilty verdict in the murder trial of ex-cop Jason Stockley in the death of Anthony Lamar Smith—in 2011.

Stockley’s police van had been struck by Smith’s car, who had been nabbed in an alleged drug deal and led police on an 80-mile-an-hour chase, at the end of which Stockley emptied his gun in Smith.

Yet even Attorney General Eric Holder declined to investigate.

On Sunday, Black Lives Matter showed up at the St. Louis’ police headquarters chanting, “Stop killing us!” But if the killing of black folks is a legitimate grievance, we need to ask: Who is killing them?

Last year, there were 4,300 victims of shootings in Chicago and 762 deaths. How many of those shootings were by cops?

How many of those shootings, mostly of blacks, were acts of “terrorism by White supremacists, White nationalists, neo-Nazis, the Ku Klux Klan,” all of whom our ever-heroic Congress demanded that President Trump, in a joint resolution after Charlottesville, denounce.

Nowhere in the resolution was there any mention of Antifa, the “anti-fascist” fighters on the other side of the Charlottesville brawl, where a protester was run down and killed by a Nazi sympathizer.

What is it in their DNA that causes Republicans reflexively to sign on to a one-sided Democratic denunciation of President Trump for the sin of suggesting there were two parties to the Charlottesville brawl?

And are neo-Nazis really a threat to the republic?

In 1963, this writer was at Dr. King’s March on Washington, which began on the Monument grounds where George Lincoln Rockwell’s Nazis were yelling slurs. On the site where Rockwell’s Nazis stood, there stands today the African-American Museum.

When my father was a 21-year-old Al Smith Democrat in D.C. in the Calvin Coolidge era, scores of thousands of anti-Catholic Klansmen strode up Pennsylvania Avenue, and the national Klan numbered in the millions.