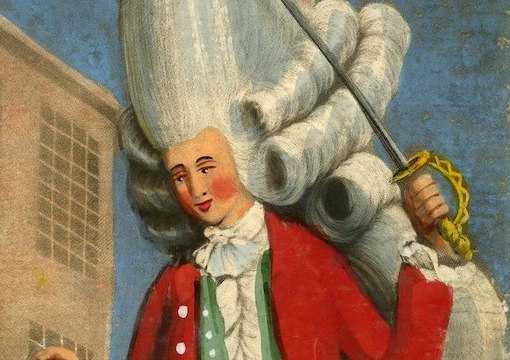 In mid-18th-century England, wealthy young British men began to adopt an outlandish fashion style known as the macaroni style. They wore giant powdered wigs with tiny hats on the top that could only be removed with the point of a sword. Their clothes were equally garish, made from expensive materials from the Continent. They adopted a highly affected personal style that was self-mocking and absurd.

Even by the standards of the day, the macaronis were ridiculous, mocked by the middle and lower classes. The images we have of the macaronis primarily come from the London print sellers Mary and Matthew Darly, who sold images of macaronis to people who enjoyed a good laugh. The macaroni was ridiculous and an unintentional bit of self-beclownment by the upper classes of British society.

The images are fun to look at today, but they are also a good reminder that this impulse by the fashionable classes to separate from the main is not a new thing. The point of the macaroni subculture was to advertise to the rest of society that these people had means and status exclusive to their class. They were signaling their wealth but also signaling their separation from the hoi polloi of British society.

“Instead of garish outfits, the vanguardist embraces absurd concepts and ridiculous arguments as a way of signaling status.”

That separation was key. These were not trendsetters or tastemakers. They did not want the lower classes to ape them. Instead, they tried to make it impossible for the Dirt People of the age to adopt the macaroni style. The style was so impractical that no one in the productive classes could mimic it. The macaroni was not just a wealthy person, but a wealthy person untroubled by the practical necessities of life.

Fast-forward to this age and we have something similar. The Cloud People of the Global American Empire are not wearing giant powdered wigs or using spy glasses, but they show up at the World Economic Forum or Davos. Maybe they let their hair down and do a talk at SXSW. At these events they scandalize the Dirt People with vanguard opinions about controversial topics like internet censorship.

That bit from the Australian eSafety commissioner, Julie Inman, about redefining speech is emblematic of this new vanguard culture. Mx. Newman has a nonsense job with a nonsense title. It is impossible to be safe or unsafe on the internet, as it is not a physical thing like a park or a dark alley. That is part of the culture. Absurd phrases like “verbal violence” and “internet safety” are the powdered wigs of this age.

You can probably date the start of this new trend among the managerial elite to the end of the Cold War. David Brooks returned from his grand tour to discover his former coevals were now bourgeois bohemians. Around the same time, Apple tapped into this by shifting from home computers to trendy consumer electronics that could be easily displayed in public by this new vanguard class.

The trouble with using display items like the iPod or iPhone as a way to signal status is that everyone can ape this style. This is why the macaronis used expensive materials imported from Europe. The lower classes could imitate the style, but not the material used in the outfits. No such barrier could exist for consumer items, as most are made in low-cost places like China, so even the poor can afford them.

This is probably what has prompted the shift from bespoke consumer items to bespoke ideas among the more fashionable elements of the managerial class. You have to have gone to the right schools and travel in the right circles to know that a Xim is never a Xir, unless they state that in their email signature. The avalanche of crackpot ideas and concepts from the Cloud People is mostly about signaling their status.

Another angle is that most of these people are filled with dread, because at some level they know they are superfluous. The Australian eSafety commissioner is a pointless affectation. If Julie Inman dropped dead in her office, no one would notice until the janitor found the body. After the discovery, no one would ask, “Who will finish the important work she started?” Her job is as ridiculous as the holder of it.

This proliferation of absurd positions and titles harks back to a similar phenomenon at the end of the czarist period in Russia. The intelligent was a member of a social group that deliberately set itself at odds with civic order. They supported terrorism, for example, not for ideological reasons, but as a fashion statement. Like the macaroni subculture, the intelligent subculture was primarily a way of signaling separation from the rest of society by mocking its rules.

Another similarity between the modern vanguardist and the Russian intelligent is the embrace of mayhem. The intelligent embraced an ideology only as a means to overthrow the existing order. Once the current order collapsed or was destroyed in a violent revolution, a new order would emerge. This new order would magically be free of all the problems associated with the human condition.

We see this with modern vanguardism. They flit from one destructive course to the next with only one object in mind: the destruction of order. They salt their jeremiads with words like “confront,” “subvert,” and “dismantle” because they are not advocating for some rational position, but rather they are making war on reason. In fact, they are making war on the natural order, which is why they embrace these weird fetishes.

The macaroni subculture in the British empire and the intelligent in the Russian empire were late-stage cultural phenomena among an elite that had run out of energy. The same is true of vanguardism in the Global American Empire. Like the spoiled children of a wealthy family, the sons and daughters of the elite indulge their childish fancies rather than taking on the burdens of the elite.

The emergence of a ridiculous class in an empire is the proverbial bell that rings at the top of a cycle. When elements of the elite begin making war on the rules that make the elite possible, it is only a matter of time before everyone does the same. This is what we are seeing in the Global American Empire. It is now ruled by ridiculous people who care more about mocking the lower classes than doing their duty. It is just a matter of time before they follow similar phenomena to the dustbin of history.