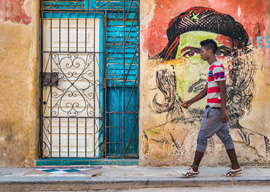 Just as everyone has his favorite crime, so everyone has his favorite dictator. For much of the 20th century, Fidel Castro was the darling of the intellectuals: partly because, like them, he was so slovenly in appearance, and partly because he represented so completely their wish fulfillment (inside every rebel there’s a dictator trying to get out). To rant for hours in front of a captive audience unable to answer or object: What greater bliss could an intellectual dream of?!

This wasn”t the first time a Latin American dictator had secured the admiration of intellectuals from across the Atlantic. As long ago as 1843, Thomas Carlyle wrote a laudatory essay on Dr. JosÃ© Gaspar RodrÃ­guez de Francia, known locally as El Supremo (which hardly needs translation). He was, said Carlyle, “a man or sovereign of iron energy and industry, of great and severe labour,” who preserved the independence of his country vis-Ã -vis more powerful neighbors by isolating it from the rest of the world, promoted education, and supposedly developed the economy for the good of the population rather than that of the landowning class, whom he dispossessed.

“The admiration in the West for Castro was essentially frivolous, more a question of style than of substance.”

Unfortunately, he was also sanguinary, paranoid, and given to a personality cult, for example declaring himself head of the local church. He executed enemies (by bayonet to save on bullets), did not allow citizens to leave, would unroll the cigars his sister made for him to examine them for poison, and would have the trees and bushes cut down anywhere he passed so that they should contain no assassins. But all this, said Carlyle, was understandable in the circumstances, and, considering Paraguay’s previous rulers, the benefits he brought far outweighed the harms. He was personally honest, not even drawing his own salary, and when he died people in AsunciÃ³n wept”which clinched it for Carlyle. To this day, people argue whether Francia was a Good Thing or a Bad, their opinion depending more on where they are on the political spectrum than on the historical record.
No doubt this all sounds rather familiar: Castro was the Francia de nos jours. Admiration for him in the West was, of course, very like Carlyle’s for Francia, that is to say from afar: Neither Carlyle’s nor Castro’s admirers would have found the regimes they affected to admire supportable even for a single day. But at least Carlyle had the excuse of ignorance: He admitted that his own view of Francia’s dictatorship was deduced from the only two contemporary accounts of Francia’s Paraguay then available to him, Reggner and Longchamp’s Historical Essay on the Paraguayan Revolution and the Dictatorship of Doctor Francia and the Robertson brothers” Letters on Paraguay and Francia’s Reign of Terror, whose negative attitude to Francia he felt it incumbent upon him to contradict (or else what was the point of writing about them?).

Both Francia and Carlyle had one great merit by comparison with Castro and his admirers: They made no pretense that the Paraguayan regime represented democracy of a higher or better kind than the merely parliamentary variety. They did not pretend that it was a democracy of any kind, and came right out with it: Francia’s self-chosen title was Dictator, and Carlyle, no great admirer of parliamentary democracy in any case, said that the Paraguayan population was so ignorant and uneducated that it was not qualified to rule itself, or even have a say in that process. Nor did they pretend that the pervasive system of surveillance and spying was anything other than a prop to the dictatorship rather than a practical expression of the popular will to defend the supposed gains of the revolution. Whether a sincere acknowledgement of avidity for power is preferable, either morally or in practice, to a pretense that it is not really being exercised at all, or if it is, only as an emanation of the popular will, I leave it to moral philosophers and political scientists to decide. Personally, from the aesthetic point of view, I prefer the traditional Latin American caudillo direct approach: that of Gen. Mariano Melgarejo, for example, who said he was going to rule in Bolivia for as long as he liked and he would hang anyone who didn”t like it from the nearest tree (in fact, he was overthrown and assassinated in exile the following year by his lover’s brother), or Gen. Justo Rufino Barrios, who was once observed to fold the Guatemalan constitution in four, place it on a seat, and then sit on it. No guff about democracy, popular, real, direct, or otherwise.