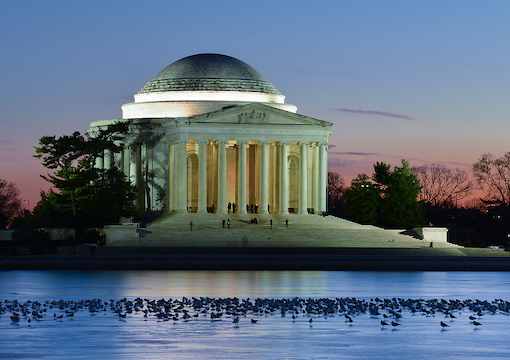 Fascinating news from The New York Times this week! Reviewing its op-ed titled “I’m a Direct Descendant of Thomas Jefferson. Take Down His Memorial,” I gather we now weigh Americans’ opinions based on who their ancestors are.

Obviously, we’re going to need a list of Whose Opinion Matters. Here’s my first stab at it:

Descendants of John Adams will have their views count the most. Adams was a giant of the Revolution, our second president, and never owned slaves.

Descendants of George Washington will come next. Some will bicker with this, inasmuch as he is the father of our country, but based on our new standards, he gets demerits for owning slaves — though, unlike Jefferson, at least he freed them on his death. (This is a freebie: Washington’s only child was the United States of America.)

Someone else can fill in the middle range in the Whose Opinion Matters ranking — this is taking a while.

I Got Double 800s on the SATs. I Think Colleges Should Drop the SAT.

I’m an Olympic Gold Medalist. I Think We Should Ban the Olympics.

Next in the Eminence Ranking will be immigrants (themselves often descendants of slave owners, murderers and rapists). In fact, immigrants may as well not say anything. Their opinions will amount to only about one one-trillionth of a foundational American’s.

Dead last are the blood relations of traitors and anarchists, such as the grandchildren of the hundreds of Soviet spies infiltrating our government during the Cold War, especially any heirs of Alger Hiss, the Weathermen and their children. That wipes out half of our college professors.

“Fascinating news from The New York Times this week!”

I’m surprised at the Times adopting a blood test, but you can’t go around publishing some blowhard demanding we take down a monument based on his ancestry and then drop the ancestry advantage for everyone else.

Speaking as the direct descendant of 13 patriots of the American Revolution, a few Union Soldiers and several strict Presbyterian abolitionists, it’s obvious that my opinion carries vastly more weight than the blood relation of a slave owner, like Truscott.

With full knowledge of the responsibility that comes with that, I say we keep the Jefferson Memorial.

Obviously, I don’t need any reasons beyond the fact that my ancestors are better than Truscott’s. But if you’d care to hear my arguments, they are that Jefferson wrote the Declaration of Independence; he was our third president; he went to war with the Barbary pirates, who kidnapped more than a million Europeans and forced them into slavery; the monument is a work of art; and — most important — removing the Jefferson Memorial would deprive me of a reason to write periodic columns saying …

We know from the DNA that Jefferson couldn’t have fathered Hemings’ firstborn, Tom. Only her lastborn son, Eston, had the DNA from some Jefferson male, of which there were at least a half-dozen living at or near Monticello when Eston was conceived.

1) Five years before Eston was born, a muckraking journalist, James Callender, furious with Jefferson for not making him a postmaster, started the rumor the president had fathered Hemings’ son Tom, which, again, the DNA proves he did not. So the theory is: Five years after being falsely accused of fathering children with Hemings, Jefferson went out and fathered a child with Hemings.

2) Eston was born in 1808, when Thomas Jefferson was 64 years old and in his second term as president. His brother Randolph was 52, recently widowed and unmarried. After Randolph remarried, Hemings had no more children.

3) Randolph’s five sons, aged 17 to 24, were also frequent visitors to Monticello when Eston was conceived.

4) While Jefferson was entertaining diplomats in the main house, Randolph would typically retire to the slave quarters for the evening. One slave, Isaac Granger Jefferson, described Randolph in his dictated memoirs thus: “Old Master’s brother, Mass Randall, was a mighty simple man: used to come out among black people, play the fiddle and dance half the night.”

5) There is not a single account of Thomas Jefferson visiting the slave quarters.

6) Nor did Jefferson take any interest in Hemings’ children. Randolph did, teaching all of Hemings’ sons to play the fiddle.

7) None of the private correspondence from anyone living at Monticello credited the rumor about Jefferson and Hemings — but several pointed to Randolph.

8) In private letters, Jefferson denied Callender’s claim, while admitting to a sexual indiscretion that would have been more shameful at the time: his seduction of a friend’s wife.

9) Jefferson’s private papers reveal his extremely negative views of miscegenation in terms so brutal they will not be repeated here. Suffice it to say that the idea of his fathering a child with Hemings is inconceivable.

10) Jefferson did not free Hemings in his will, despite freeing several other slaves.

11) The claim that Jefferson fathered Hemings’ children originated in the brains of feminists. At first, historians strenuously objected, but eventually decided the better part of valor was to cower under their desks and pray no one accused them of “racism.”

To every cloud there is a silver lining, and the one to the Times’ Ancestry Test for Political Relevance is that we’ll never again have to hear from a professor or student at Yale, a school whose namesake — currently, right now, in 2020 — is Elihu Yale, slave trader.