Why I Hate Italians 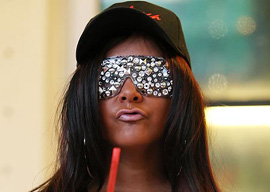 At my Catholic high school, I took to screaming, “Speak English, you’re in Canada now!” at the hirsute, dimwitted, disco-loving “ginas” blabbering about how they couldn’t help Mamma make the spaghetti sauce that week because they had their periods and it would give the family the evil eye.

Back when my mother went to that same all-girls school, a strict “no jewelry” policy was enforced; after the student body turned overwhelmingly Italian (and heavily laden with 18K gold crucifixes and cornicelle from “the old country”), that rule was thrown out the window—just like they tossed the teacher out the window at the boys’ school across the street.

That was the rumor anyhow, and I believed it. There were no female teachers on staff; they would have been simply ignored (or worse). The snickering, swaggering “ginos” didn’t have to wear uniforms—another rule that had become unenforceable. On the rare occasions I was obliged to venture into the boys’ school, I felt like Dian Fossey.

It isn’t true that Eskimos have a hundred names for snow, but Italians have almost as many for “slut.” However, unlike the Irish, who call you a skank if you do sleep with them, Italians call you “puta” when you won’t. Long before movies such as Raging Bull cemented the image of the dumb dago in the aptly named wife-beater shirt yelling, “You call those carrots?!,” my mother enforced only one dating rule:

Not that they would have been interested in me, except to help them with their homework.

But after I moved to Toronto about 25 years ago, I came to miss the little greaseballs. Surrounded by pale, spindly, bicycle-riding, socialist metrosexual hipsters who’d never held a hammer or gotten into a fistfight, I secretly started renting Moonstruck (written by an Irishman, by the way) in heavy rotation. Although The Sopranos and Jersey Shore remain unwatchable, I find listening to Adam Carolla talking about sheetrock oddly soothing. I’ve acquired an appreciation for their all-encompassing bigotry, even though it’s a weird trait in a tribe that still can’t decide if they’re white.

Last year a friend bought his first house in one of Toronto’s few remaining “Virgin Mary in the front yard” Italian neighborhoods. As he sat exhausted on his front porch the day he moved in, his new next-door neighbor—a little Sicilian whose colossal satellite dishes threatened to block out the sun, or perhaps somehow discover a new one—shuffled over and offered him a tiny white cup of espresso.

In broken English, he asked my friend what he did for a living.

“When I told him I was a journalist, his face lit up. Then my wife found out he’d thought I’d said ‘janitor’ and was really impressed.”

My friend wanted help with his first garden, so he kept his mouth shut.