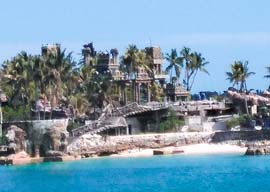 Take the Aga Khan and Bell Island, in the Exumas. The property tycoon unlawfully dredged the seabed of the island he acquired to create a 200-foot-deep harbor for the accommodation of both his yachts. In the process, he possibly destroyed coral reefs and certainly destroyed surrounding marine life, polluting it with the silty effluent that is normal for a major construction project. Only, inside a national park, a protected area, which is illegal. He’s not alone here, but it makes a mockery of the Aga Khan’s philanthropic deeds, which appear to be nothing but smokescreens””guilt money””to disguise his disregard for the rule of law, or law of nature; whatever. He’s only as complicit as the people he paid to flout the law.

Several scientist sources recall how the Aga Khan’s Sustainable Exuma Foundation gathered together”at great expense”groups of scientists from Harvard and elsewhere. The best scientists he could find, who were extremely well paid, to spend a great deal of time performing traditional analyses not on the topic of marine conservation (although his sons appear genuinely interested in conservation), but instead on a topic like “the perfect habitat for human beings on the planet”?

The conclusion”discovered by the many analysts, including urban planners (of all people!), and the Harvard School of Design”was: the traditional Bedouin home! Of all perfect habitats… What this finding has to do with the Exumas or with marine conservation, no one knows. Nonetheless, upon presentation, this academic exercise with zero relevance incited real scientists to surrender to serial fits of giggles, the kind they hadn”t enjoyed since childhood in church. When they finally stopped laughing, the experts rolled their eyes and agreed that the analysis was “bullshit.” A better alternative, one suggested, might have been the support of fishermen; or of park enforcement budgets; even a coral transplant project? All ambitious causes worthy of a potentate.

On the other hand, take Tyler Perry, a movie mogul who broke Hollywood’s rules by exclusively targeting the undervalued Afro-American audience, thereby cornering the box office. Despite buying an island directly beside the home of the park warden, he erected no less than 40 separate buildings”each one breaking the law”so he could accommodate his VIBP guests in style. By comparison, the Lyford Cay Club, which practically put the Bahamas, or Nassau at least, on the world map, was denied permission to build an ice cream shack on its own beach.

The takeaway? Clearly, in the examples above, two parties paid their way in bribes, exploiting the Bahamian corruption problem for their own benefit. The third party applied by the rules and, despite a 60-year heritage, was duly denied.

The Exuma island buyer with the least evident environmental footprint”with low-to-no footprint, in fact, as far as the eye can see”is Johnny Depp. His (renamed) cay was developed with such subtlety, you”d never know it was inhabited if you sailed past. So minimal was Depp’s impact, even the visual order of the island was retained”not a single building is visible. Whereas many otherwise perfect cays hide concrete mixers and vats of plaster behind palm trees and shrubbery.

He’s an exception. The list goes on. The question is:

Does everything on the planet have a price tag?