Will Elites Blow Up the GOP? 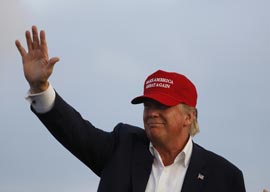 Candidates who have gone through a yearlong campaign, and sustained the defeats and suffered the abuse, are not going to let a Beltway cabal decide the nominee.

Carson has already warned he will walk away from the party if such a decision were imposed upon the convention.

What is left are elites, collectives of officeholders past and present, donors, lobbyists, think-tankers angling for jobs, party hacks and talking heads.

What the Republican collectivity has to realize is that it is they and the policies they produced that are the reason Trump, Carson and Cruz currently hold an overwhelming majority of Republican votes.

It was the elites of both parties who failed to secure our borders and brokered the trade deals that have de-industrialized America and eviscerated our middle class.

It was the elites of both parties who got us into these idiotic wars that have blown up the Middle East, cost us trillions of dollars, thousands of dead, and tens of thousands of wounded among our best and bravest.

That Republican elites would sit around a dinner table on Capitol Hill and discuss how to frustrate the rising rebellion against what they have done to America, and decide among themselves who shall lead us, is astonishing.

To borrow from the Gipper, they are not the solution to our problems. They are the problem.