Will Hollywood Ever Get it Right? 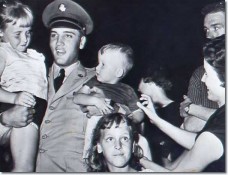 Tonia and I didn”t have much in common. She hadn”t heard of Prague, lobotomies, or The Da Vinci Code, which, I thought, pretty much covered all of Western culture. But we had to talk, because we were two unemployed Army wives, living together in a one-bedroom apartment in Germany with our infantrymen as we waited for my husband’s housing paperwork. After a couple days of awkwardness, Tonia and I finally found a topic we could bond over: German sluts. German sluts would try to steal your man. German sluts would go after any soldier, they didn’t even care if he was married. German sluts wore a lot of ugly spandex. We discussed German sluts and watched Seinfeld and drank pickle juice together. I had never done that before. It was like drinking a cup of bottom shelf vodka. It was like drinking a cup of death.

This is what Army wives” lives are really like. They bear little resemblance to the treacly drama Army Wives, Lifetime‘s most popular show. Army Wives would have been better off to have stolen the mantra of Seinfeld: no hugging, no learning. Second Lady Jill Biden, who recently guest-starred on the show, offered the same tired platitudes real Army wives hear every week from their husbands” bosses and the various groups created to keep the wives feeling good about sacrificing so much for a war so few believe in. “Just know that you are not alone,” the softly-lit Biden said. “We are so grateful for what you do.” The thing is, these banalities are not comforting, they’re irritating.

After almost a decade of war, American soldiers are revered by most of the country. It’s not that soldiers appreciate it, but all this reverence has an unfortunate side effect: pop culture doesn”t dare to criticize Army culture. Or make fun of it, which is a shame. It is a better setting for comedy than for drama.

Maybe that’s why nearly every Iraq or Afghanistan war movie”critically acclaimed or not”has been a box office flop, even as videos of soldiers dancing to Lady Gaga go viral. One of the most successful Iraq films, The Hurt Locker, won an Oscar but pulled in just $16.4 million domestically. That’s about half as much as The Men Who Stare at Goats, a comedy about a 70s-era military program to teach psychic powers. Perhaps its modest success can be attributed to its exploration of the absurdities of military life, even if the events happened 40 years ago. Because it’s not that civilians aren”t interested in soldiers. But treating them as sacred, and ignoring the absurdities of military life, makes them boring.

“To TV writers, the Army is made up of wise, wooden warriors and strong women who cry silent tears. But unlike the 30-something men and women on Army Wives, a good chunk of the guys going over to Afghanistan now were in grade school on 9/11.

The Army is this massive engine trying to keep a couple million young people together while discouraging as many as possible from doing stupid things. Military families are bombarded with the same vapid phrases Biden used—especially overseas, because then their TV content is donated by entertainment companies. That means no commercials, only PSAs. Hilarious PSAs. Don’t drive drunk. Don’t boat drunk. Be nice to special needs children. Don’t give anyone general power of attorney. Don’t shake your baby. America loves you.

These, along with countless motivational-but-kinda-condescending posters, banners, and speeches make the contrast between reality and the portrayals of military families especially amusing. To TV writers, they”re wise, wooden warriors and strong women who cry silent tears. To the Army, they”re kids. Because they are. Unlike the 30-something men and women on Army Wives, a good chunk of the guys going over to Afghanistan now were in grade school on 9/11.

In the third season of Army Wives, Denise is watching the news when she sees that the unit led by her husband, Frank, came under fire on a mission. They’re trapped in hostile territory! She rushes to find the family readiness group leader to find out what happened, but the woman won’t tell Denise much because Denise cheated on Frank so maybe they’re not really married. Then Denise goes to her friend, the wife of a high-ranking general. She doesn’t have any info either. Denise spends some time looking pained, but later, her friend’s husband calls to say Frank is ok and will be back on base in an hour. The friend calls Denise. Denise collapses the floor and cries with relief.

Denise would have never recognized her husband’s unit from watching CNN. Reports of car bombs and firefights are plentiful, but real details are scarce. For me, it felt like two wars, the one on TV and the one Scott and his friends described. When Scott called at 5 a.m. on Valentine’s Day, the day after he said he was going on a five-day mission, I knew something was wrong. “I have good news and bad news,” he said. “I don’t have to go out on the long mission. That’s the good news.” He”d been hit by a double-stacked landmine. I held my breath and wondered whether he’d lost his arm or his leg. “I have a concussion. It’s ok, I just have to stay awake for a while.” I breathed. So far, he had stayed up by watching Last Tango in Paris.

“When they pulled us out, they asked Moon what day it was. He said ‘Frankenstein’s Day.’”

“They asked me who the president was, and I said Barack Hussein Obama, because it’s…” and then the phone connection got all fuzzy, as it often did. “‘fff….‘ah…. chaaan…”

“Omg go back to the hospital, you are worse than we thought.”

“The bad connection is a translator.”

“It messes up my words but clarifies my meaning.”

We spent most of the phone call laughing.

Unlike these wars, previous wars were fought by more than 1 percent of the population, and the movies at TV about them are irreverent and funny, like M.A.S.H., Stripes, Catch-22, Sgt Bilko, and countless other classics, because the military wasn”t this alien culture set off from the rest of America. Earlier generations are familiar with the military, warts and all. My parents loved No Time for Sergeants, a World War II movie all about corruption and stupidity. Because it was a good story. Now, a tiny group of people signs up to fight, and then they deploy again and again. The movies about them feature a dull soldier with a Southern accent and heart of gold doing battle against various Bush-era policies. Pundits scold Americans for being disinterested in our wars when these movies bomb, but it’s not because people don’t care about soldiers. It’s because they don’t want to be bored.