Will There Be Life on Mars? 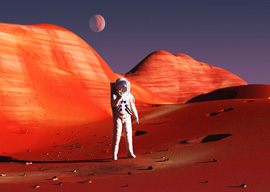 But apart from the technological advance that every space mission seems to bring (what we learned from Curiosity‘s “sky crane“ will bear all sorts of real-world fruit), this entire hubbub is about Mars. Mars! The angry Red Planet has captivated man’s mind for as long as we can trace myths. In Chinese astrology, Mars is linked to fire. Mars was the Roman god of war, and the Hindus called Mars “Mangala” after their own war god. In keeping with this…er…martial tradition, Dante peoples the heaven of Mars with holy warriors.

Astronomers”most notably Percival Lowell”believed they saw an intelligently made planet-wide network of canals, proof that Mars was home to a race of sufficient technological skill to pull off such an engineering miracle. Right up until Mariner 9 took up orbit in 1971, a rapidly diminishing crowd among mainstream scientists held out hope that some kind of intelligent life might yet be found on Mars. Despite the dashed hopes produced by Mariner’s disproving the canal hypothesis, the satellite began unveiling Mars’s complex surface.

What we think we know now is as exciting a tale as any born of Lowell’s observations”of a once Earthlike planet that somehow became much colder and mysteriously lost most of its surface water and atmosphere. Where did those key elements go? Were they leached into space, or do they persist in a frozen state, awaiting the Sleeping Beauty kiss of planetary warming to return Mars to its former glory? Is this change permanent, or is there some long-term cycle at work? Above all, did the planet once”or perhaps, somehow, does it still”harbor life, as an Antarctic meteorite tantalizingly suggests?

We should try to answer these questions, partly because it might benefit life on Earth and partly because we might one day be able to more profitably make use of our sister planet. Certainly an overwhelming success with Curiosity may force Obama’s hand in approving future missions to Mars.

But there is more to it than that. As with the Olympics”but in a more objectively useful manner”space exploration is something that can unite people. We have precious little of that today. It may well be that someday Ray Bradbury’s Martian Chronicles will be accurate in one respect: Our descendants will be the Martians.