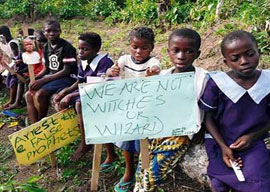 Human-rights groups and assorted do-gooders have been filling up my Twitter timeline with news of a phenomenon many think no longer exists: literal witch hunts.

In 2009 the leader of The Gambia, the self-titled Sheikh Professor Dr. Yahya Abdul-Aziz Jemus Junkung Jammeh”perhaps best known for being the inventor of an herbal HIV “cure””launched a witch-hunting campaign. Police, army, and national intelligence agents kidnapped up to 1,000 people at gunpoint. They were taken to secret detention centers and severely beaten, almost to the point of death. They were forced to confess and to drink “potions.” At least two died from potion-induced kidney failure.

Self-appointed witch hunter and self-described “Lady Apostle” Helen Ukpabio recently launched a crusade she calls “Witches on the Run” in Nigeria. The Observer reports that accused children in the country are “burnt, poisoned, slashed, chained to trees, buried alive or simply beaten and chased off into the bush.” Some have had nails driven into their heads. Ukpabio is helping to fuel this rampant child abuse.

Magical genital thievery is a common belief in certain parts of Africa. As a psychiatrist named Sunday Ilechukwu describes it:

In Nigeria, Benin, and Ghana, suspected penis snatchers have been beaten to death by angry mobs. Journalist Frank Bures traveled to Lagos to investigate the issue: “In a typical incident, someone would suddenly yell: Thief! My genitals are gone! Then a culprit would be identified, apprehended, and, often, killed.”

In 2008 police in the Democratic Republic of Congo arrested 13 people for using black magic to steal or shrink men’s penises.

A BBC reporter traveled to a church in Angola seeking child victims of witchcraft. Among those shackled to the walls and the floor he found an emaciated eight-year-old boy. “If the child dies, it means the child is evil,” he was told. The child died days later.

In the Central African Republic an estimated 40 percent of court cases are witchcraft prosecutions. Graeme Wood of The Atlantic spoke to a judge in the country who admitted that “there is usually no evidence.” Asked how one determined guilt he replied, “The judge will look at them and see if they act like witches….His principal advice to clients was to refrain from casting any spells in the courtroom.”

Apartheid South Africa’s Witchcraft Suppression Act of 1957 has been less than successful. In a lengthy review of a recent anthropological study (Witchcraft and a Life in the New South Africa by Isak Niehaus), Jeremy Harding describes the country’s occult situation:

…when a bunch of kids had chased a monkey from a cafÃ©, it had ‘mysteriously’ disappeared into Doris’s yard. Obviously she was a witch and the monkey was one of her familiars. The comrades arrived at Doris’s house, dragged her into the courtyard and stoned her to death.

The anthropologist gives one of his subjects money for medical treatment. Naturally the dying AIDS victim spends it on witch-diviners. For all medical symptoms the diagnosis is the same: Witches are responsible. Ear trouble? Witches “wanted to recruit her as a zombie and had put an invisible worm into her ear to start the metamorphosis.” Boils on your legs? “A potion had been placed on her path and she’d absorbed it through the soles of her feet.” A terminally ill woman is taken to a witch-finder who “went into a trance, lured the familiars into her own body and then sneezed them out.”

Where people are undiscerning enough to believe that sorcerers can fly at night and transmogrify into animals, it is perhaps unsurprising to find that some have tried the juju for themselves. Things were so bad in Uganda the government had to set up an Anti-Human Sacrifice Taskforce.