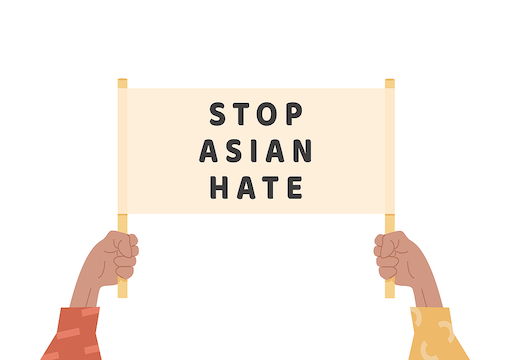 Operation Slippery Slope has hit a snag: too many casualties from friendly fire.

From its official launch in January, Slippery Slope was an ill-conceived aktion with a smoky objective. The plan was fairly simple: Scour local news for all instances in which an Asian person was assaulted by a stranger. Present those incidents with no control sample (i.e., how many whites were assaulted by strangers in those cities during the same period) so that, absent perspective, an illusion is created, a mirage of an epidemic of anti-Asian mayhem carried out by white supremacists because of Covid, Trump, and “China virus” hate speech.

When a white person is savagely attacked by a black, the default official position is always “not hate crime” unless there’s extraordinary evidence to the contrary. Conversely, Slippery Slope’s handbook mandates that all assaults against Asians are default “hate crimes” regardless of the circumstances.

The timing of the operation is odd. Trump’s been out of office for months. Peak lockdown rage has passed; cities are opening up again. Plus, there’s no correlation between the cities where residents are still being tormented by lockdowns (like L.A.) and the location of the assaults. And if the timing is peculiar, so’s the objective—in that it’s hard to figure out exactly what it is. There’s no election coming up, no Trump to defeat, no Democrat in a tight race in a heavily Asian district.

Worse still, most of the assault perpetrators have been black. That really put a dent in the “white supremacist” thing. Until last week, when a repressed neurotic white Bible-boy who lives in fear that every time he jerks it Jesus takes a spear to the pericardium gave an unhappy ending to eight massage-parlor temptresses, six of whom were Asian. This would be Slippery Slope’s Gulf of Tonkin! Now the “epidemic” had drawn mass blood (sure, two of the victims were white, but details, details…). Time for an all-out offensive against racist whites whose anti-Asian words and thoughts had “contributed” to a “climate” that “caused” the mass shooting. The fact that the killer didn’t have a racist motive or a track record of racist comments was irrelevant; the media quickly declared that the police can’t be trusted to accurately investigate the crime. Journalists and Hollywood celebrities simply “knew” that racism was the motive, and their psychic hunches beat actual investigative work and facts (so much for “trusting the science”).

This Chinese chicken salad of stupidity became such a big deal, President Biden and Co-President Harris journeyed to Atlanta to “mourn” the victims (just the Asian ones). History books will forever record that the very first Biden/Harris joint trip was a pilgrimage to grieve for six massage-parlor employees.

Praising the trip, the AP pointed out that Harris is “the first person of South Asian descent to hold national office” (wait, wasn’t she “black” just a month ago?).

Still, this massive operation was steaming ahead with no obvious goal. And any military exercise launched without a fixed goal can only go south because there’s no clearly defined north. Arguably, the endgame might be passage of Biden’s “COVID-19 Hate Crimes Act,” described by the AP as “a bill that would strengthen the government’s reporting and response to hate crimes and provide resources to Asian American communities.” But the books are already crammed with so many “hate crime” statutes, manufacturing a phony epidemic to pass one more seems a waste of energy.

“Why is Slippery Slope so awash in misfires?”

Media darling Alexi McCammond, a woman with literally zero skills beyond having been born black, and it’s an open question if that’s actually a “skill,” was hired away from her position as proud black reporter at Axios and MSNBC to be the proud black editor of Teen Vogue. Earlier this year, the magazine’s diapered zoomers balked at McCammond because back when she herself was a teen, she tweeted a few hurty things about Asians. But Condé Nast, owner of Teen Vogue, pledged to stand by the new hire. That is, until Rod Flanders shot up those massage parlors. Within days, McCammond got her proud black walking papers.

Following McCammond’s departure, Teen Vogue senior staffer Christine Davitt, a Filipino “fat queer femme” who led the fight to get McCammond McCanned, was herself “canceled” after angry black McCammond supporters dug up old tweets in which she called people “nigga.”

And another black is in critical condition, not expected to pull through. Alison Collins is the vice president of the San Francisco Board of Education. Back in 2016, she went on a tweetstorm calling Asians “house niggers” who “use white supremacist thinking to assimilate and get ahead.” She also claimed that Asian students routinely taunt and bully black and brown ones as Asian teachers look on. And she condemned merit-based admissions standards for letting in too many Asians.

Collins is now being pelted with calls for her resignation. A recall effort has already been initiated.

Even a deceitful attempt to “cancel” a white police captain in Cherokee County for “diminishing” and “excusing” the Atlanta shooter and his motives didn’t go as planned. Asian activists were more outraged over the actual diminishing and excusing done by Jewish Marxist San Francisco DA Chesa Boudin, who dismissed the 19-year-old black murderer of 84-year-old Thai man Vicha Ratanapkadee as a frustrated youth who merely had a little “temper tantrum.”

A white was targeted, but a Jew got hit.

Why is Slippery Slope so awash in misfires?

Well, for starters, any scheme that involves trying to elevate Asians or any group to the position of victimhood currently occupied by blacks is destined to fail. Jews have tried that themselves (“oy, we’re just as oppressed as blacks!”) with equally disastrous results. As I explained a few weeks ago, blacks aren’t even keen on sharing victim status with Hispanics, but at least in that case both groups can claim similarly low socioeconomic and academic achievements. But when Asians and Jews try to muscle in on the victim action, blacks balk, because those two groups have been able to achieve a level of success most blacks can only dream of.

Also, and I say this as a guy who spent his youth in majority-black public schools, blacks love a good “chinky chinky Chinaman” joke. Scratch any black Twitterer and you’ll find at least a few past tweets making fun of Asian speech, looks, or behavior. To the blacks in my school, Asians represented either the high-scoring geniuses who show them up in class, or the liquor-store owners who dare demand they not shoplift.

In more recent years, the spread of “white privilege” theology has widened the black/Asian rift. If one accepts as gospel that success in America comes only via white privilege, then by logical extension one must believe that any group that succeeds is part of that privilege. That’s the only way to view the situation while still adhering to the faith. Asian success “proves” that Asians are part of the privilege power dynamic that exists to oppress blacks. Therefore, Asians are part of the problem (and as such can’t be “allies”).

That’s the irony in trying to frame the “anti-Asian violence plague” as a “white racism” problem. Blacks are far more likely to be anti-Asian than whites, even right-wing whites. Sure, many white rightists justifiably view China as the prime threat to the U.S., but conservative opposition to China is not opposition to the Chinese as a people. In fact, anti-CCP Chinese are beloved. Steve Bannon, for example, is squarely in the pocket of anti-CCP Chins. The inveterate fawning fraudster claims that the Chinese people are “the single biggest victims” of Covid, so fuck off Americans with your whining. Bannon was even lounging on a Chinese billionaire’s yacht when he was arrested last year. Indeed, back when prison seemed Bannon’s certain destination, I worried that he’s so used to fellating Chinamen, the poor guy might dislocate his jaw on a black cellmate.

Losing blacks in the name of the new Asian “untouchability” will be disastrous for leftists. Yes, Asians are reliably Democrat voters (Vietnamese possibly excepted), but blacks are the heart of the party. Blacks give the Democrat Party “moral” justification for its actions, and black thugs serve as the party’s strikebreakers, its Pinkertons. If black suffering doesn’t guilt you into assent, black fists will make you a less refusable offer.

Politically inclined Asians are surely enjoying their newfound importance. The smart ones—and there are lots of those—understand that if you can get a Democrat to sacrifice a black in your name, you have clout. It’s a tenet religiously adhered to by both Asians and Jews: Always exploit an edge. Since the Atlanta shootings, the steady stream of crocodile tears dampening the inscrutable faces of Asian media elites has been impressive. I half expect them to cry “nevah again.”

The cynicism’s so thick you can cut it with a scythe. And here’s where Jews and Asians part company. Asians—the Chinese specifically—are strikingly unsentimental. Jews, on the other hand, are hobbled by sentimentality. These Hollywood storytellers, these nebbishy authors of Tin Pan Alley torch songs, have a vulnerability. They’re genuinely hurt, emotionally lanced, when blacks turn against them. “We’re brothers in the struggle! Can’t the schvartzes see what we’ve done for them?” The storied history of social justice Jewry is intertwined with the history of blacks. “Oy, we cofounded the NAACP! We funded the civil rights movement! Chaney, Goodman, Schwerner!”

Asians are far less inclined to be emotionally scarred if blacks don’t like them. They know they’re not “in it together” with blacks; they don’t share that lie the Jews tell themselves. If Democrats want to make it a crime to speak ill of Asians, Asians will work that edge expertly, black collateral damage be damned.

The question becomes, will Democrats be comfortable with that damage? My gut says no. A few more canceled high-profile blacks, a few more brutish black assailants, and we’ll likely see the winding down of Slippery Slope, a hastily assembled unfocused Bay of Pigs-style fiasco that will soon fade from memory, especially as the Chauvin trial and the one-year anniversary of the martyrdom of Saint Floyd approach, and blacks get to reassert themselves as the only group that truly matters (or else!).

I just hope that during the next riot blacks don’t hold too much of a grudge against Asians for briefly stealing their spotlight. And I’m sure the Asian owners of convenience stores in black neighborhoods share that hope…to a much greater degree.