You Are Now Entering…The Shariah Zone 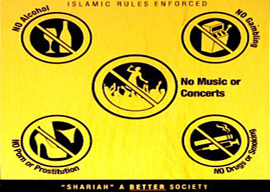 As the world struggles to make sense of Anders Breivik’s ugly, senseless slaughter and largely incoherent online manifesto, you might have thought that the Islamist fringe would have enjoyed having the heat taken off them while the world’s attention shifted to extreme Christian-based fanaticism. You’d have thought wrong. Instead, at least one small-but-belligerent group has taken it upon themselves to promptly demolish whatever upsurge in public sympathy they might otherwise be enjoying by forcibly reminding the public that there will always be Muslims who love to act like bat-shit crazy loons at the merest provocation.

Case in point: Muslims against Crusaders (MAC), a nut-fudge fringe group based in the UK, recently instigated a campaign to introduce “Shariah-controlled zones” in various parts of London. A lively and colorful series of stickers and flyers suddenly appeared on buses, streetlamps, and shop windows in various areas of the city, warning pedestrians and drivers that, Rod Serling-fashion, they were now entering…The Shariah Zone. “Islamic Rules Enforced” explained the posters somewhat menacingly, aided by a series of helpful pictograms illustrating the zone’s banned activities—gambling, pornography, alcohol, music, concerts, drugs…it would seem easier to list the activities in which a hapless visitor would be allowed to engage upon entering the designated areas. As far as I can tell, men are still permitted to be clean-shaven when wandering into said neighborhoods and ladies may be uncovered, but hey, it’s still the early days.

“Nothing says ‘cultural outreach’ like thuggish, self-appointed guardians of religious morality patrolling the streets to intimidate and harass ordinary citizens.”

The zones are the brainchild of Anjem Choudary, the British-born blowhard who leads the banned militant group Islam4UK (apparently, there isn’t a hadith that forbids annoying SMS-language on grounds of it being “un-Islamic”) and who has commented that the campaign is part of a larger plan to “put the seeds down for an Islamic Emirate in the long term.”

“We now have hundreds if not thousands of people up and down the country willing to go out and patrol the streets for us,” Choudary says, “and a print run of between 10,000 and 50,000 stickers ready for distribution.”

Nothing says “cultural outreach” like thuggish, self-appointed guardians of religious morality patrolling the streets to intimidate and harass ordinary citizens. The Breivik fallout has led to soul-searching and hand-wringing in Europe’s ongoing debate about the merits and demerits of immigration and multiculturalism. Attention-seeking charlatans such as Choudary and MAC seem determined to prove Breivik’s more paranoid beliefs—you know, the “total Muslim takeover of Europe and the known world” sort of stuff—to have some basis in reality. If I were conspiracy-minded, I might think that Choudary and Breivik were social-media buddies who played poker together on Wednesdays.