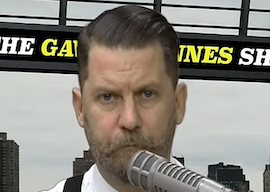 Surely by now you’ve heard the story about that hate crime involving a criminal gang of fascist white-supremacist neo-Nazi alt-right bigots who swarmed peaceful protestors in Upper Manhattan a couple Friday nights ago and beat them senseless while calling them faggots.

If you’re a regular reader of this site, by now you’ve probably learned that what happened wasn’t nearly as one-sided or hysterically hyperbolic as that.

I’ll try to piece together the facts as carefully as I can and to the best of my knowledge:

Shortly after the Metropolitan Republican Club invited former Taki’s Mag contributor Gavin McInnes to speak at an event on Friday, October 12, club representatives say they were besieged by “increasingly contentious phone calls at the Club, coordinated by activist groups on social media” for days demanding the event be canceled.

On the morning of the event, vandals spray-painted the anarchy “A” on the club’s front door, smashed windows, glued locks shot, and damaged a keypad entrance system.

They also left a note that, to a sane person, sounds a touch threatening:

Tonight, we put the Republican Party on notice, in defiance to the policy of mass misery they have championed.

The U.S. government has established concentration camps around the country for Latino people, shamelessly murdering black people, and continues its war machine that has slaughtered Muslim people with impunity for decades.…

While these atrocities persist unabated the Metropolitan Republican Club chose to invite a hipster fascist clown to dance for them, content to revel in their treachery against humanity….

Our attack is merely a beginning. We are not passive, we are not civil, and we will not apologize.

“Facts never mattered to ideologues. It used to drive me crazy until I realized they were the crazy ones.”

Maybe it’s my reptilian brain speaking here, but when I see groups of people showing up in public with their faces covered and screaming that you should be exterminated, I suspect they may be up to no good.

After Gavin delivered his speech, video shows members of his Proud Boys fraternal order of “Western chauvinists” leaving the club and being escorted away by police who were protecting them from shrieking throngs of predictably PMSing leftists spouting vitriol and threats.

The video proceeds for a little over three minutes as police shunt the Proud Boys away from the howling throngs. Then at some point it shows them suddenly darting down the street. Before you know it, there’s a street fight in front of a storefront.

Separate surveillance video from behind the storefront window shows a group of five masked people clad in black. Then it shows one of those “peaceful protesters” throwing a bottle. Then it shows those faceless “activists” getting swarmed by Proud Boys and beaten into the ground.

As far as I can tell, this was a case of mutual combat where one side lost and then cried foul.

Miraculously, as is the wont of the media, the New York political class, and a depressing quotient of human beings, the official narrative became one that quarantined guilt in one group and entirely absolved the other group from any hint of responsibility.

No prizes for guessing which group was painted as the bad guys.

According to VICE magazine, which Gavin helped found and from whom he had an acrimonious split about a dozen years ago over “creative differences,” the Proud Boys were “picking fights with protesters,” which anyone who’s seen the video will know is a lie. You don’t “pick fights” with people that the police see a need to protect you from.

Even though Gavin has made clear that he thinks the idea of “hate speech” is silly, over the past few years he has taken great pains to disavow the Alt-Right, white supremacists, white nationalists, and anything explicitly pro-white. Some see it as a matter of ethics, others as a shallow business move. The Proud Boys, as a pro-West organization that sees the West as a matter of culture rather than blood, routinely vet incoming members and kick them out at the mere hint of “racism.” They actively court nonwhite members. A picture of them taken on the night of the now infamous brawl shows they are far more multicultural than, say, the writers for The Daily Show.

But facts never mattered to ideologues. It used to drive me crazy until I realized they were the crazy ones.

Modern leftism has metastasized into something so blindly totalitarian, all you need to be a “Nazi” is to refuse to bow to their increasingly preposterous demands.

New York officials, despite a veneer of attempting to “investigate” and “review” what happened, appear to have already made up their minds. It was all about the phantom demon “hate,” which was obviously only harbored in the evil hearts of one side.

Mayor Bill De Blasio, whose greatest achievement in life is converting a black lesbian into the mother of mulattos, said:

The NYPD is fully investigating last night’s attack involving the Proud Boys. If you know anything, the NYPD wants your help. Hate is never welcome in NYC and we will punish those responsible — whether they threw punches or incited violence — to the fullest extent of the law.

New York City Public Advocate Letitia James—a black chick, not that there’s anything wrong with it, although it may, y’know, “color” her views, wrote:

I am disturbed and disgusted by the videos I’ve seen of members of the neo-fascist, white supremacist Proud Boys group engaging in hate-fueled mob violence on the streets of New York City. New York will not become the next Charlottesville, and we refuse to let the actions of a hateful few define our City.

I call on the NYPD to investigate and arrest each and every individual involved. Given the clear homophobic and anti-immigrant sentiments expressed in the videos, I strongly encourage Manhattan District Attorney Cy Vance to pursue hate crime charges in this matter.

It is revolting to see white supremacists commit a hate crime on the streets of New York City — in full view of the NYPD — and for none of them to be arrested or prosecuted.

Authorities must review these videos immediately and make arrests and prosecute as appropriate. Hate cannot and will not be tolerated in New York. Here’s a message from a Queens boy to the so-called ‘proud boys’ – ​NY has zero tolerance for your bs. ​

To demonstrate exactly how “zero” his zero-tolerance policy is, Cuomo called for the FBI to investigate the Proud Boys in what many people assume will be an attempt to file racketeering charges against Gavin and his group.