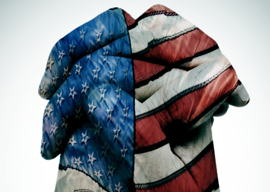 Whether you cut your dick off or just start saying “I”m a woman,” that doesn”t mean you”re a woman. That trivializes what it is to be a woman. These mythical creatures can create life. You can”t just throw on a wig and yell “Me too.” That’s sexist.

9. GAYS LEAD THE SAME LIVES WE DO

I”ve heard Jon Stewart say this and it often comes up when discussing gay marriage and adoption. Do any of these people know any fags? They are perfectly wonderful human beings with whom I spend much of my time, but they are also hair-whiteningly decadent. They call me an amateur for having participated in a couple threesomes. They”ve had dozens of eightsomes.

Maybe one in ten Americans believes the earth is only a few thousand years old, and most of those people are old ladies and dirt-poor farmers. They”re not shutting down schools and canceling Cosmos. The other 90% of us are totally okay with the big bang theory. Even the pope supports it. We understand there’s evolution and an incredible universe. We just think God is the one who set the whole thing up.

Also, if you love science so much, stop refusing vaccinations for your kid. You”re literally making us sick.

Not so fast. Have you seen the way this administration handles money? We”re 17 trillion in the hole. That’s a lot. Seventeen trillion seconds ago we were cavemen trying to figure out fire. This country is rife with severe obesity and millions upon millions of illegals. We don”t have the cohesion that other free health care countries have, so this perfectly reasonable idea may be impossible.

There is a lot of evidence that says the earth is warming but not a ton of conclusive evidence that it’s our fault or that the warming is a bad thing. We keep hearing about a consensus but it’s ecologists, not real scientists. What all the experts and politicians really agree on is that we need more funding to pay them to look into this terrible problem.

13. THINGS ARE GETTING WORSE

The air has never been cleaner. We”ve never lived longer. Crime is at an all-time low. By virtually every possible metric, life has never been better. Yes, there was a school shooting recently. That doesn”t change the hatefact that schools have never been safer. Traveling, eating, fornicating, fighting”all safer than ever. The list goes on and on. I saw a homeless man today checking his iPhone while he asked for change! Does anyone in this country not have a TV? If you think things were so much better back then, get in a time machine and go there. Make sure you get your shots first though. God help you if you get sick.

14. DIVERSITY IS OUR STRENGTH

When it comes to restaurants this is true, and that is why people always use restaurants to prove it. By any other standard, it tends to go pretty badly. I”m a race mixer but our family has decided to err toward Western values more than the American Indian ones because the West is the best. Assimilation leads to a sense of fraternity and that means a cohesive society. You ever see a wave pool in Japan? They are packed in there like sardines but they don”t mind because they”re all the same. When integration is discouraged you get Balkanization and we saw what happened in the Balkans. They played soccer with human heads.

You know there’s retards, right? You realize the children of geniuses tend to be smarter than the children of stupid people, yeah? This is why they ask sperm donors questions. That’s what happens when idealists have to practice what they preach. They scoff at eugenics until it’s time to make a baby. They love the gay lifestyle until their son brings home a tranny. They love diversity until it’s time to choose a place to live or a school for their children. They pretend we”re all equal but they insist the government enforce this because they secretly know it isn”t true and in fact see themselves as superior to everyone else. They”re free to think that, but before going on a rant about it, maybe they should look it up first. Better yet, shut up and leave us alone.