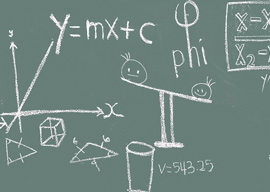 Piper Harron is an unhappy-looking black woman whose mood would be greatly improved if white male math professors would just “fess up to their unearned privilege and quit their jobs. She is currently a “temporary assistant professor“ in mathematics at the University of Hawaii at Manoa, and I think we can all agree that this is the first time any of us has ever heard of that school.

Piper holds a Ph.D. in Mathematics from Princeton University, which sounds impressive until you take into account the mathematical fact that a study from Princeton reveals that blacks are given a handicap of 230 SAT points compared to whites when it comes to admissions standards.

In a recent blog post titled “Get Out The Way,” she implies that white males are impeding her from getting a better job than, you know, a gig as a “temporary assistant professor” position at some no-name school in Honolulu:

If you are a white cis man (meaning you identify as male and you were assigned male at birth) you almost certainly should resign from your position of power. That’s right, please quit….What can universities do? Well, that’s easier. Stop hiring white cis men (except as needed to get/retain people who are not white cis men) until the problem goes away ….I know you”re not going to quit your job, but I want you to understand that you should….Not to alarm you, but statistically speaking you are the problem. Your very presence. I can”t tell you what is the best strategy for you to stop blocking my path. I can just ask that you please get out of my way.

Ms. Harron is not the only person of non-maleness who thinks that math is a thinly disguised weapon to impose white male supremacy upon unfairly marginalized groups. Harvard-trained mathematician Cathy O’Neil“whose homeliness cannot be measured in mere integers”wrote a book called Weapons of Math Destruction which argued that “Big Data” has conspired to use algorithms for the sinister purpose of squashing everyone who isn”t a white male under a huge white-male thumb.

This summer, math teachers at middle schools across this once-fine nation can treat themselves to a six-week online course called “Teaching Social Justice through Secondary Mathematics,” which asserts”with zero mathematical documentation, mind you”that “For centuries, mathematics has been used as a dehumanizing tool”:

Do you ask students to think deeply about global and local social justice issues within your mathematics classroom? This education and teacher training course will help you blend secondary math instruction with topics such as inequity, poverty, and privilege to transform students into global thinkers and mathematicians.

One wonders whether they want social-justice teachers to ask their students to think deeply about mathematics. Not bloody likely!

A recent paper”alleged to be scholarly”titled “A Framework for Understanding Whiteness in Mathematics Education“ states, without one shred of statistical data to bolster their allegations, that:

Naming white institutional spaces, as well as identifying the mechanisms that oppress and privilege students, can give those who work in the field of mathematics education specific ideas of how to better combat racist structures….A lot of times in whiteness literature, we talk about the refusal to pathologize whiteness, and this is a case….For African Americans, for Native Americans, for Latinos in mathematics, we attribute something internally to the child or internally to the culture that’s making them achieve lower.

I remember hearing the ludicrous, stillborn idea that “math is racist” all the way back in the early 1990s. A 1990 paper called “Western Mathematics: the secret weapon of cultural imperialism“ claims that “western mathematics” was “one of the most powerful weapons in the imposition of western culture.” It then goes on to argue that “western mathematics” originated in India, China, and the Middle East, which means they aren”t really Western, anyway, so why are they even bitching?