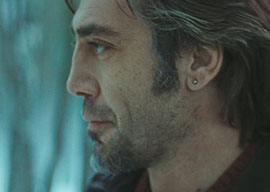 GonzÃ¡lez IÃ±Ã¡rritu is a spectacular TV commercial director, but his movies seldom have much in particular to say. Babel‘s theme, for instance, was…communication. His underlying preference is for melodramatic telenovelas. Thus, his first Hollywood movie, 2003’s 21 Grams“with Sean Penn, Naomi Watts, and an outstanding Benicio Del Toro, a goofier-looking version of Bardem, in a similar role as an ex-con trying to go straight”featured a ludicrously humorless storyline about heart transplants and vengeance. But IÃ±Ã¡rritu disguises his lowbrow taste in stories with current highbrow markers such as jittery camerawork and scrambling the plot in the editing room.

Fortunately, Biutiful has only one story. Unfortunately, it’s extremely depressing. And GonzÃ¡lez IÃ±Ã¡rritu has a new trick to maintain his indie cred: a soundtrack of loud, grating noises.

For a director, GonzÃ¡lez IÃ±Ã¡rritu has little sense of place outside of Mexico. In 21 Grams, Memphis wound up looking like Minneapolis, and in Biutiful, he manages to make even Barcelona seem generic. For instance, Biutiful‘s dialogue is in Spanish, Chinese, and Wolof, yet not a word of Catalan is spoken.

“Fortunately, Biutiful has only one story. Unfortunately, it’s extremely depressing.”

Just as Babel dwelled upon California’s illegal immigration, Biutiful is set among Barcelona’s illegal immigrants. But while Hollywood approves of illegal immigration here as a way to Fight Racism (while Solving the Servant Problem), globalizing Barcelona doesn”t appeal to sophisticated, authenticity-seeking Americans. In Biutiful, the Chinese sweatshop immigrants who make counterfeit purses and the West Africans who peddle them don”t instill Barcelona with vibrancy; they just make it another tourist trap. Hollywood has a vague sense from Orwell’s Homage to Catalonia and talk of FC Barcelona’s soccer rivalry with General Franco’s Real Madrid that Barcelona’s working class deserves respect rather than displacement. Moreover, it’s embarrassingly obvious by now that Spain’s recent immigration fad was only another housing-bubble bad idea. Young Spaniards” current unemployment rate is 42.9 percent. Thus, Babel was showered with Oscar nominations, while Biutiful barely found a distributor in this country.