A Nation of Working-Class Dropouts 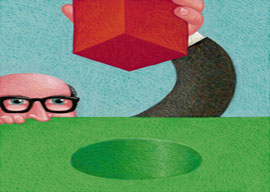 When I see young people wandering around in a daze with $60K of student debt on their backs, I see a welder who never was. Forcing everyone to become smart is like a countrywide affirmative-action plan. It doesn”t work. I once questioned Jared Taylor about his statement that affirmative action in universities is bad for blacks, and he told me that blacks who have been bumped up to colleges above their test scores rarely prosper. They drop out. He also said they don”t drop down to a lesser school or a trade school; they drop out entirely. That’s what America has become: a nation of working-class dropouts with no direction, no pride, and no sense of self.

Another problem with assuming everyone needs to be educated is the sheer cost. We spend at least $10K per student per year. That number has been climbing steadily since the 1950s, while test scores have remained flat. It ain”t working. Encouraging the dumb kids to drop out in their teens the way they did in the 1950s would save us billions, and our policies should reflect that. If a student with terrible grades wants to leave school and go learn how to fit pipe, he should be rewarded some of the money we”re saving. Buy him a car or some tools. Pay the rent at his workshop. Give him a gift card for Home Depot. Teens who are bored in the classroom should be working the garbage trucks. It sure beats forcing them to watch documentaries about the Baader-Meinhof gang.

I don”t understand why Britain abandoned the 11-plus system. Englishmen are the kings of working-class pride. Britain’s blue collars cultivate their accent and encourage each other to further ostracize the middle class by using rhyming slang. Their soccer teams are their life, and the farthest they”d ever travel would be the summer fair in Blackpool. The 11-plus system had the UK running like clockwork until the myth of equality blew it all apart. The septics (“septic tanks” AKA “Yanks”) followed suit, and soon the entire Western world was predicated on the myth that more education equals more prosperity.

The controversy that destroyed 11-plus is long and complex, but the CliffsNotes version is that some clueless politician saw educated siblings do better than uneducated siblings and thought, “They should all have the opportunity to do as well as their brother.” But the educated sibling didn”t thrive because he was educated. He was educated because he thrived. If you think his brothers got ripped off, tell it to God. He was the one who doled out the lower IQs. 11-plus recognized that some people are smarter than others. Getting kids out of school early also means less government, which is another big reason it was abolished. Only an idiot could truly believe we”re all equally smart.

I’m not denying that outsourcing and automation has made many jobs obsolete. Of course it has. But that doesn’t mean you abandon the entire concept of a working class. There is still a huge demand for skilled labor.

But our young people aren”t skilled (or interested) in hard labor, so we bring in illegal Mexicans. When you take away a young person’s ability to work, you take away their pride. If we had more skilled tradesmen, we”d have more entrepreneurs in manufacturing and the Rust Belt would get a coat of paint. The hulking youths from the factory floor of yesteryear are tending bar today. They make enough money to pay the interest on their student loans, but that’s about it. They can”t pay rent, so they live with their parents and they have no self-esteem because this bar job is the first one they”ve ever had. “Undocumented” workers did all the chores while growing up. Many of them also make more money than the bartender who sleeps on his parents” couch ever will. Way to go, equality.