A Penny for your Thoughts 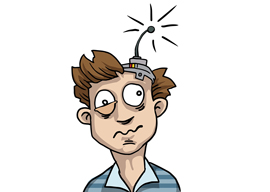 And these are the mental processes of a high-IQ, well-educated, fairly well-socialized geezer.  Imagine the poor telepath stuck on a long plane journey next to Rachel Jeantel.

(In deference to the scholars, I”d better insert a cautionary note here in regard to monitoring one’s own thoughts.  Qualified, credentialed scientists have done careful studies on this, and self-monitoring turns out to be a dubious business.  “People are often dramatically mistaken about what they think they”re thinking””Hurlburt and Heavey, “Exploring Inner Experience.”)

It’s not all dreck, of course.  Probably dog-walking, and the attendant acts of canine hygiene, just encourage the lower kinds of thoughts.  At other times the quality is better:

Rehearsals.  There is some significant social encounter in your near future.  You will give a speech, confront your boss, attempt a seduction.  You think about how you”ll do it; you anticipate the pleasure of success, the misery of failure.

Planning.  The assembly of complicated structures”businesses, tree houses, meals”requires connected thought.  Right now I”m making a table for my kitchen, one that will fit precisely into an inconvenient corner.  An elegant and useful thing, that did not previously exist, will come into the world, in part via my powers of mentation (though in much larger part via the generous efforts of a friend skilled in cabinetry).  I think about what comes next, which piece fits where.

(Sorry, but this needs another cautionary note.  There is a metaphysical theory named epiphenomenalism which argues that while mental events are indeed real”a thing some philosophers deny”they don”t make anything happen.  All causation is material: our thoughts are just epiphenomena”useless by-products.  That’s easy enough to believe when I”m fretting about my nose hairs or savoring a revenge fantasy”I mean, really, what’s the point of that stuff?”but hard to swallow when you see the table you made.)

Smugness.  When I”ve finished my table, I shall think about it with satisfaction, which may tip over into smugness.  When we”ve done something well, there’s pleasure in thinking about how good it looks, sounds, reads, felt.

The telepath, if he exists, of course enjoys some great advantages.  Not-too-frequent trips to Las Vegas or Macau will relieve him of the need to work for a living.

On the whole, though, I pity him.  “The mind is a drunken monkey,” the yogi told Adam Smith.  That’s mostly what the telepath is hearing all around him, all day long: the chittering of drunken monkeys.