A Plague of Ingrates 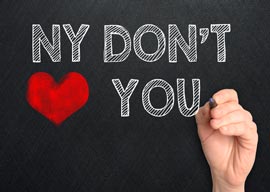 Don”t get me wrong: the cops in many American cities are out of control. Not too long ago, the police in my hometown of Syracuse tasered and beat a retarded man so severely they broke his hip. His “crime?” Being a straphanger. In cities such as Spokane, the police are so vicious and savage that they practically qualify as a criminal syndicate. But if you”ve never even been in a fistfight, you have no right to complain about the men who commit violence on your behalf.

The badge-baiting of Andy Cush and company should be seen for what it is: the petulant screaming of spoiled brats. Wilting violets who go “EEK!” at rats in subway tunnels and hate how rude New Yorkers are yet still think they have what it takes to be cultural pioneers. Every trustafarian snacking on $9 salmon sandwiches in Bushwick sees herself as the new Lydia Lunch, oblivious to the fact that Lunch got her name because she was so poor she had to steal food to keep her ribs from meeting her spine.

And thanks to the hipster left egging on cop killers, the NYPD has thrown up their hands and gone home. Traffic tickets and other minor citations have plummeted in recent days, and beat cops are sitting out their patrols like it’s the John Lindsay days all over again. Unsurprisingly, the hairy Midwesterners who are Tweeting #ICantBreathe are shocked that the people they constantly insult and berate are less than enthused about protecting them. When the inevitable crime wave happens, watch for all the anti-police hipsters to claw their way onto Milwaukee-bound Greyhounds like Dalits on a Calcutta train.

In the meantime, I”ll be making my stateside home in a city where concealed carry is legal and the bouncers aren”t jerks.