A Tale of Two New Yorks 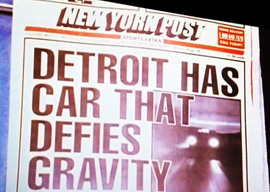 The New York Post is what we all want to read if we’re honest with ourselves. It starts out with fluff. It has a pretty girl on page three and some celebrity gossip. After page ten we hear about local crime and some corrupt city officials, and then it’s on to the four or five think pieces you don’t see anywhere else.

I have my own problems with the Post. They hate bike lanes and worship Israel. They have a bizarre reverence for organized crime and vilify “snitches.” Outside of those flaws, the Post is everything a morning paper should be: informative and amusing.

There are some good things about the Sunday Times. Chuck Klosterman has done a great job with “The Ethicist” column. The “Lives” column at the end of the Sunday magazine is always well written. But mostly, reading The New York Times is like talking to someone who has headphones on and doesn’t realize they’re yelling. Almost every page drips with pandering.

Racists call the paper The Jew York Times, but the way the paper coddles Muslims I wouldn’t be surprised if they eventually sell it to Al Jazeera. When reading about a terrorist attack in the Times you always hear about a “youth” trying to detonate a bomb. It inevitably takes several paragraphs before you find out the guy’s name was Mohammed and several more before you learn he was an extremist Muslim. Even then, the information is couched with implications that the feds entrapped him and led him down this path. It took them forever to go near the Muslim Brotherhood. Features about female circumcision in Africa read like the story of an exotic bake sale. Just change the name to the Painfully NaÃ¯ve Multiculturalist Liberal Times and be done with it.

Bill McGowan has meticulously laid out exactly why the Times has a bias, but what drives me insane is how oblivious they are to their own faults. It’s also what drives me insane about the other America. They pretend they’re for abortion because it’s about women’s rights, but I think the real reason they support it is they don’t want more scum filling our streets. I don’t care if that’s how you feel, just be honest about it.

That’s what separates the two New Yorks. One is so fearlessly honest, it can make a joke about the horror that lies right beneath our noses. The other is so blindly utopian, it can’t even look at what’s right in front of its own face.