A Tale of Two Suburbs 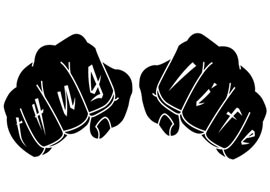 Straight Outta Compton is much celebrated by white critics for showing our heroes being hassled by suspicious police. (Ferguson is often cited by enthusiastic reviewers.) But, even sanitized as the film is”Dr. Dre’s penchant for beating women was left out, and I can”t recall a single scene of anybody smoking crack”Straight Outta Compton is still full of so much puerile mayhem that it’s hard to conclude that the cops weren”t sensible in trying to run these jokers out of town.

For example, when the Torrance police see our heroes hanging around outside the recording studio in gang gear, they force them down on the ground to send the message that Torrance isn”t gang ground. Their manager, middle-aged macher Jerry Heller (played by Giamatti) excoriates the cops: These aren”t criminals, they”re artists.

And indeed they weren”t affiliated with either the Crips or the Bloods. Just as drummer Dennis Wilson was the only surfer in the Beach Boys, N.W.A’s not-very-skilled frontman Eazy-E was the band’s only career criminal, and he was in the weed-dealing business (a less murderous line of work than cocaine). The more talented members were boys from respectable families who”d avoided serious trouble to focus on their entertainment ambitions. (Dr. Dre appears to have prudently restricted his violence to hitting girls.) But they couldn”t tell the cops that they were just pretending to be vicious thugs to sell records because that would have undermined their lucrative vicious-thug image.

I was particularly struck by their encounter with the Torrance police because I had looked into buying a house in that suburb in 1991. Like much of Southern California near the ocean, Torrance’s housing stock was of poor quality. (Before antibiotics, rich people had built inland in places like Pasadena out of fear that ocean fog causes tuberculosis.) And Torrance’s enormous oil refinery tends to periodically belch noxious fallout over homeowners.

But the schools were good because it’s a low-crime community. Today, while the Beach Boys” Hawthorne, three miles north of Torrance, is over 80 percent Latino or black and Compton is 99 percent non-Asian minority, Torrance is still 42 percent white, 35 percent Asian, 16 percent Hispanic, 6 percent mixed, and only 3 percent black.

Torrance’s homicide rate in this century has been about one-fifth of Hawthorne’s and one-twentieth of Compton’s. How did Torrance dodge this (literal) bullet?

After watching Straight Outta Compton, I would guess: by the Torrance Police Department profiling black youths dressed as killers. Why did Torrance have the courage to save itself? I don”t know. Perhaps because Torrance’s large, politically powerful Asian presence (Torrance was the American headquarters of Toyota from 1982 to 2014) was immune to white guilt?

Straight Outta Compton is watchable enough, but it could be funnier if the filmmakers hadn”t played down the inherent dark comedy. For example, the movie only passingly alludes to how each of the three main ex-members went to war with one another aligned with their own paramilitary bullyboys. Ice Cube employed Minister Farrakhan’s bow-tied Fruit of Islam, while Dr. Dre used Knight’s Maxi-Me’s: several Suge look-alike 300-pounders. But, sadly, we never quite get to see the muscle employed by Eazy-E and his partner Heller: right-wing Rabbi Meir Kahane’s Jewish Defense League.

After Ice Cube goes solo because he’s tired of being ripped off by the Eazy-E/Heller axis, N.W.A’s rump disses Ice Cube with a rap calling him a “Benedict Arnold.” Ice Cube furiously responds with “No Vaseline,” a remarkably antigay denunciation of his ex-friends.

You might expect that the cunning Heller, who had blithely facilitated the Compton youth’s manifold antisocial messages, would encourage this profitable feud to continue. But instead, upon hearing Ice Cube complaining that “You let a Jew break up my crew” and that blacks shouldn”t put up with “a white Jew tellin” you what to do,” an outraged Heller switches off the stereo and denounces black anti-Semitism for several increasingly hilarious minutes.

Sure, rappers encouraging impressionable youths to deal crack, beat women, battle the police, and murder other blacks is just entertainment, Heller seems to imply. But a rapper protesting the venerable tradition of Jewish agents cheating musicians, black or white, well, that’s beyond the pale!