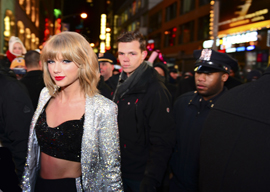 But still…Beyoncé’s not as blond as Swift. And there are a remarkable number of people out there who feel that the celebrity who looks slightly less unlike them being more popular matters to their own personal popularity and thus happiness.

Now, this is not just fan loyalty, where you like some celebrity and root for him or her to do well.

The sports business has long mastered the art of getting audiences to feel it’s important that so-and-so win. The players on your hometown team are probably not from your hometown, but so what, they wear the hometown colors (for this season, at least).

But what about entertainers? In an age of identity politics and social constructionist theorizing, it’s easy for the entertainment industry to play upon fond hopes that some superstar’s fate is entwined with your own.

For example, not many middle school girls in these days of obesity and “the changing face of America” can realistically expect to ever be as skinny and fair as Swift, while more can aspire to look sort of like Beyoncé. Thus, if Beyoncé bests Swift in the battle for society’s admiration, there is hope, the thinking goes, that boys will think you are pretty.

A huge fraction of upcoming generations feel racially oppressed by having to compete with girls who look like Swift. As Beyoncé explained in a Grammy award acceptance speech:

It’s important to me to show images to my children that reflect their beauty, so they can grow up in a world where they look in the mirror, first through their own families—as well as the news, the Super Bowl, the Olympics, the White House, and the Grammys—and see themselves, and have no doubt that they’re beautiful, intelligent, and capable.

Thus Beyoncé isn’t just out there battling to get richer, she’s fighting the good fight for you against the skinny blond girls who get all the attention from the eighth-grade boys.

Like the South Park underpants gnomes, the logic in the middle school Beyoncé fan’s brain goes like this:

Phase 1: Give money to Beyoncé

Phrased like that, this common view that if the celebrity you identify with becomes even more celebrated then you will be adored too sounds rather puerile. Isn’t it more likely that Beyoncé winning will materially benefit Beyoncé (and her children) more than it will her fans?

So the argument is seldom phrased that artlessly. Instead, it is expressed in the language of academic postmodernism. If only society celebrated your body image more and devalued the skinny blond bitches, then, uh, boys would like you more.

In reality, of course, boys who care a lot about Beyoncé versus Taylor Swift don’t like girls.

Teenage girls will always be easy for master marketers like Beyoncé and Swift to manipulate. But the scary thing is that by this point many of Beyoncé’s most militant fans have aged way past middle school. Many of them now seem to be journalists. Whether they’ve learned much since adolescence, though, is less apparent.

Sailer’s First Law of Female Journalism remains: The most heartfelt journalistic extrusions will be demands for how society must be reengineered so that, come the Revolution, the writer herself will be considered hotter-looking.