A World Without Western Civ 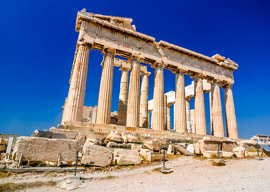 At the Republican National Convention last week in Cleveland, none of the speakers used the phrase “white people.” Anti-racists, however, need to make EVERYTHING about race, so they made it about white people anyway.

If you’re really optimistic, you can say that this is the last time that old white people will command the Republican Party’s attention, its platform, its public face. That hall is wired by loud, unhappy, dissatisfied white people.

King tossed the bomb back in Pierce’s lap:

This “old white people” business does get a little tired, Charlie. I’d ask you to go back through history and figure out, where are these contributions that have been made by these other categories of people that you’re talking about, where did any other subgroup of people contribute more to civilization?

A fat black female panelist began hootin’ and hollerin’ and acting as if she caught the vapors, whereupon Hayes scolded King that white people were responsible for Hitler and Stalin.

“If you were to note every manmade item within your field of vision, chances are that nearly every last gadget and trinket was invented by a white man.”

MSNBC would later describe King’s comments as “jaw-dropping.” The Washington Post called his comments “weird.” The website Quartz referred to his utterly rational and dispassionate question as “an awkward, racist rant.” And Esquire deemed his question to be “batshit” crazy.

I suppose that when you don’t want to answer a question, it’s best to gaslight the person who asked it. Asked later about his now-infamous question, a remorse-free King noted that none of the apopleptic co-panelists had bothered to answer it:

You go back and Google “old white people,” “old white men,” [and] you”ll find that that comes out of the mouth of leftists constantly. They have decided it’s open season on white people in America from an ideological standpoint. And I hope it stops there, but somebody needs to stand up for the contributions that have been made by Western Civilization. And if we disparage our roots, if we disparage what makes this a great nation, then we”ll lose the formula for being an even greater nation. So I stood up for our foundation, for our history, for our culture, of Western Civilization, and I said so. And if you”ll notice, Chris Hayes didn”t want to go down that path after that.

Of course, this didn’t stop others from attempting to go down that path. The oniony-looking Rebecca Onion of Slate asserted that it made “no sense” to judge groups by their historical inventions, despite the fact that a given racial group’s level of technological innovation is tightly correlated with its relative success and prosperity. Writing for Salon, a certain Sarah Watts didn’t appear to be joking when she credited Africans for inventing “humanity.” (I suppose other inventions were hard to come by.) She also typed with a straight face that non-American and non-European “subgroups” like Asia, Latin America, Africa, and the Middle East are almost solely responsible for what we consider modern society.”

There are reams of evidence of technological innovations by the ancient Chinese, the ancient Indians, and the ancient Semites”emphasis on the “ancient.”

For example, the Chinese invented gunpowder. But for some reason these perennial warriors and kung-fu fighters weren’t savvy enough to use their invention as a weapon of war.

The ancient Indians are widely credited with inventing the numerical system we currently use. But they certainly didn’t invent calculus like Newton and Leibniz did.

Most uncomfortable for egalitarians and their ilk is that there are vast landmasses”sometimes entire continents”where the indigenous inhabitants have invented virtually nothing. Sub-Saharan Africans are not known for contributing much to rocket science, and black Americans are so underrepresented as inventors that everyone has heard a gazillion times about the mulatto who improved blood-storage methods and George Washington Carver’s wondrous dalliances with the magical peanut. The so-called “Native Americans” are credited with inventing the spinning top, which somehow proved incapable of defending them against the white man and his guns. And Australia’s aborigines? Well, let’s not talk about them, because they’d be embarrassed. Peruvians can take pride in developing the art of potato cultivation. And I’ve already covered the Mexicans and their nachos.