Africa on the Brink 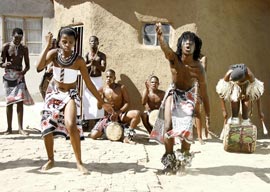 Why was there no Malthusian trap in Africa until quite recently?

Outside of a few healthy highland regions such as Ethiopia and Rwanda (home to notorious genocides), for most of the thousands of years that agriculture has been practiced, the vast sub-Saharan region has been relatively underpopulated:

The human population has never approached the size that the continent seems capable of supporting. … An FAO survey published in 1991 reported that only 22 per cent of land in Africa suitable for agriculture was actually in production (the comparable figure for south-east Asia is 92 per cent).

Reader notes that because humanity originated in Africa, both diseases and mega-fauna competitors such as elephants and lions have been co-evolving along with us over the millions of years. Thus, humanity never got the drop on the African ecosystem the way it did on other continents, especially the New World.

When the first Siberian hunters broke through into North America, they rapidly filled up the New World because there were few indigenous diseases and the trusting local elephants, such as the wooly mammoth, didn”t anticipate that these unimpressive looking two-legged newcomers carried sharp spears.

But in Africa, tropical diseases such as sleeping sickness and falciparum malaria were a major cause of infant mortality and an incessant drain on the adult population.

Moreover, elephants were wily rivals to humans. Without a dense concentration of humans to drive off marauding herds of elephants, they could eat your entire crop in a day:

A “sort of chessboard effect” developed, with people occupying one set of squares and elephants the other. … [O]ral histories recount how farmers succeeded in raising crops to maturity only when their fields were close together and the local community was large enough to supply the people needed to repel raiding elephants.

But if human density got too high, infectious disease took its toll, especially on the young. (That’s why black Africa was so lacking in urbanization.) In Africa, life (and death) was more random than elsewhere, so lack of foresight was less reliably punished and planning less often rewarded.

The rational response to the African environment was simply to procreate more offspring whenever possible, even though you may well lose numerous children to disease and do a poor job of educating the others. In Africa, traditionally, the biggest risk was having too few people in your village:

This realist perspective shouldn”t make us too gloomy about Africa’s ability to change, though.

These African traditions of quantity over quality in raising children are now obsolete in a world where elephants are no longer rivals. Africans now have AK-47s, so it’s more likely that four billion Africans will kill off all the wild game than that the elephants will get the upper hand again.

Indeed, many people in Africa today would like to change their self-destructive old ways. But if white people keep reassuring them that they”re awesome just the way they are and that any problems they have are the fault of bad white people, how can we expect Africans to develop a less catastrophic culture?