Alec Baldwin Sticks His Foot up His Ass Again 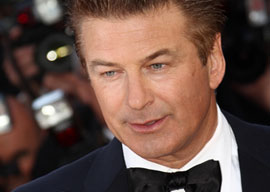 But kudos to Cooper for playing the (admittedly tedious) “right wing” version of fantasy football that we “tea-baggers” call “Can You Imagine If Rush Limbaugh Had Said the Same Thing?!?”

You see, it’s Baldwin’s “homophobia,” not his creepy threats, that had folks left and right threatening to cut up their Capital One cards. (Baldwin’s the company’s celebrity spokesman.) GLAAD, as usual, demanded a very public (and supposedly career-saving) groveling apology.

After deleting his Twitter account (again) in a huff, Baldwin broke his short-lived silence to argue (unconvincingly) that the word “queen” “doesn’t have any necessarily sexual connotations.”

This mess would be less newsworthy if celebrity cook (one hesitates to call her a “chef”) Paula Deen hadn’t just been fired from virtually all her brand-name gigs for the “crime” of referring to the black man who robbed her at gunpoint in 1987 as a “n*gger.”

People have tried to explain the double standard by pointing out that “Alec Baldwin gets a pass because he’s such an amazing actor.” Except he’s not. Any competent performer could’ve pulled off his supposedly brilliant turn in Glengarry Glen Ross. (And that was in 1992.)

Then I’m told it’s because “Alec Baldwin is a staunch, highly vocal liberal, and the elites look after their own.”

Except that Paula Deen campaigned for Barack Obama in 2008.

And Jesse Jackson“as well as the “n*gger” who robbed Deen“have since pleaded for an end to the increasingly rabid Paula Deen hate-on.

Interestingly, since Anderson Cooper’s coy “question” on Twitter, other pretty mainstream media gatekeepers, not all of them “right wingers” by any means, have wondered the same thing.

Could it be that, between Deen and Baldwin and the intense irrational hypocrisy we’ve just witnessed, Paul Kersey is right that the “Elite’s Show Trial Strategy [is] About To Backfire”?

I wish I shared Kersey’s optimism. However, it’s more likely that Paula Deen’s suddenly unemployed staffers will now have plenty more time to watch TV, where they will get to see creepy Alec Baldwin’s increasingly puffy face smirking back at them from an all-new Capital One commercial.

When he utters the tagline”“What’s in your wallet?””they can all yell back, “Not a damn thing!”