An Epidemic of Clowns 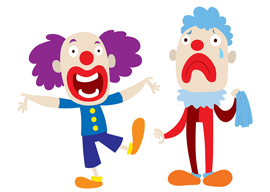 All the students agreed that they wanted to learn in an environment where they were free to speak up in class, even if their opinion wasn”t popular. That wish was far from reality. Haidt split the class among gender and racial lines by asking if either group felt intimidated when voicing their thoughts among their peers.

About three-quarters of the female students felt comfortable speaking in class versus only 20 percent of males. Likewise, nonwhite students were more comfortable expressing their opinion versus their white counterparts. And, of course, conservative students felt like they were walking on eggshells compared with liberals.

Even at the high school level, the PC regime is strong. Just imagine you”re an average white male student in America. Media elites undermine you constantly. Your school is a weird social experiment where sexual minorities are mollycoddled. You can”t utter a word in class without the shrill shriek of harpies silencing your voice. And if you happen to live in a part of the country racked with globalization, your family and neighbors might be stuck in a deadly cycle of drug use and empty excuses.

So what do you do? You dress up as the villain from It and you sit on the street corner, because what else is there besides Schlitz and weed? And with a Hollywood reboot just around the corner, all the better to take advantage of a well-known and well-feared character.

While young blacks use their idle hands to loot businesses, white teenagers (again, I”m assuming this is a SWPL trend) and youngish adults whittle away time in vape shops and use clown costumes to cause a public nuisance. Hillary Clinton has gotten one thing right this election cycle: The millennial generation are still children of the Great Recession, and are still slumming it in their parents” basements, looking for any stimulation outside of the marathon video gaming.

When you”re jobless, prospectless, and hopeless, why not sow some discord around your neighborhood? It’s all good fun for now. But unless something is done to stem the hollow sense of life among young Americans, things like late-night clowning will stop being a laughing matter.