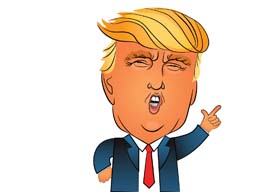 If Trump has fallen short of a glide path to the nomination, the war goes on. But if Trump seems to be the near-certain nominee, it will be a time for acceptance, a time for a ceasefire in this bloodiest of civil wars in the GOP.

Otherwise, the party will kick away any chance of keeping Hillary Clinton out of the White House, and perhaps kick away its future as well.

While the depth and rancor of the divisions in the party are apparent, so also is the opportunity. For the turnout in the Republican primaries and caucuses has not only exceeded expectations, it has astonished and awed political observers.

A new “New Majority” has been marching to the polls and voting Republican, a majority unlike any seen since the 49-state landslides of the Nixon and Reagan eras.

If this energy can be maintained, if those throngs of Republican voters can be united in the fall, then the party can hold Congress, capture the While House and reconstitute the Supreme Court.

Come the ides of March, the GOP is going to be in need of its uniters and its statesmen. But today, all Republicans should ask themselves:

Are these folks coming out in droves to vote Republican really the bigoted, hateful and authoritarian people of the Post’s depiction?

Or is this not the same old Post that has poured bile on conservatives for generations, now in a panic that America’s destiny may be torn away from it and restored to its rightful owners?