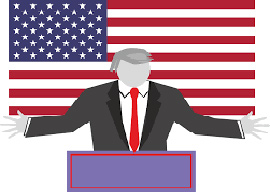 Al-Jazeera“which naturally has my best interests in mind, seeing as I am neither a Muslim nor from the Middle East”says that the “difference between right and left-wing populism” is that the former inspires fear, while the latter instills hope.

It quickly becomes clear that in its modern usage, “populism” is a pejorative used by global elites to describe any “people’s uprising” that they aren”t personally orchestrating.

Listen here, all ye smacked, condescending asses, all you powderpuff socialist theorists who”ve never had to work an honest, sweaty day in your lives”one of the things I”m always ready to bang fists over is the accusation that I don”t know what it’s like to be working-class. On my way back from the inauguration, I stopped to take a picture in front of the house I grew up in outside Philly. The people in this neighborhood don”t give a soaring fuck about your tranny bathrooms and your crocodile tears for Muslim refugees and illegal immigrants, nor do they want to hear a single word about how uber-wealthy parlor pinks at The Nation understand what’s in their best interests”they just want to work an honest job, take care of their kids, and eat a couple Italian hoagies while watching yet another Super Bowl where the Eagles won”t be playing.

No, Donald Trump has no idea what it’s like to grow up in a block of brick row homes like this, and he was raised under completely different circumstances than I was. But he’s the only political candidate I”ve ever heard who not only addresses the issues that concern me, he speaks with the direct crassness of somebody from my neighborhood. Whether he’s faking or not doesn’t matter so long as he makes good on his promises.

There was only one political lawn sign on my old block when I visited this time”a Trump sign. This neighborhood used to consist of all working-class white Democrats, but this was before the Dems tossed both the “working-class” and the “white” planks from their platform. Trump became the first Republican to carry my home state since 1988.

So all this nonsense about him being “fake” and “phony” comes from sheltered sore losers whose tired and condescending rhetoric fell on deaf ears in this truly working-class neighborhood. The billionaire Trump actually communicated to the working class in a way that resonated deeply with them, whereas the urban champagne socialists couldn”t make a dent. Imagine that.

Perhaps populism isn”t a virus at all. Maybe it’s more like chemo. I don”t even like people, but I”m A-OK with Trump’s brand of populism. I”ll take it over your fake-ass, Soros-bankrolled “people’s uprisings” any day of the week.