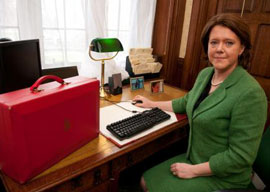 Even after recent reforms of the expenses system, it’s quite hard to work out precisely what MPs are paid, due to ongoing perks and benefits. The effective annual salary is now £77,738, with extras that are certainly in excess of what one might get in a normal job. This has risen considerably over the last generation, as is repeatedly noted; for example, a Guardian leader of 1 July last year argued against any further increase on the basis of the rise since 1979. Well, maybe it has; but if the level still isn”t enough, then the increase is irrelevant. MPs are supposed to be running this country, and we should reasonably expect them to be paid a salary on a level comparable to that of their peers. I”m not saying it must equal what CEOs of major international companies take home, but current levels don”t even compare with public sector wages.

Look, for example, at teachers” pay. A top-level teacher in central London is paid up to £64,677. But a head teacher there is paid up to £113,303. I would argue that we should value an elected member of our national legislative body at least as highly as a head teacher. I”d say even higher, although I”m sure many will decry that. How about NHS salaries? Specialty doctors and associate specialists earn up to £69,325 as a base, salaried GPs up to £81,969, consultants up to £101,451. Many hospital trust executives are on levels greatly above that. Similarly, in regional government, as of last year there were 2,525 council employees paid more than £100,000, with 42 paid more than £250,000.

It’s all very well to say that those top salaries are too high, but they often compare unfavorably with the private sector, where main board directors” pay tends toward the seven figure level, and regular directors” salaries of £150,000 or more are perfectly normal. That’s not even beginning to look at financial sector salaries. In that light, a salary of £77,738 is simply not comparable to executive level pay. And, whether we like it or not, we are no longer in a world where one should be expected to take on an underpaid job for the honor of serving one’s country.

People may say: “They”re all liars and cheats. I can”t stand them. They”re not even worth what they do get.” Well, again, I would say that the first part of that isn”t true. And we”ll only solve the second part by paying enough to consistently attract top people. And if they”re already top people, we shouldn”t begrudge their receiving a commensurate salary. Pay MPs properly and you could do away with the last of the overgenerous and overcomplex hidden extras and finally imbue the system with real clarity. “Properly” does not mean paying the people who run our country below senior”and well below top”public workers. The present deep unpopularity of politicians is not valid grounds for punitive disincentives for the job.