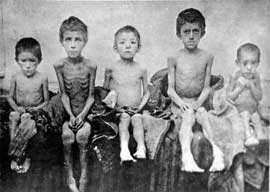 He told us we would work at night, feeding the horses linseed cakes mixed with chopped straw. He said we should do this when people are asleep, because if they were awake, they would eat the horses’ fodder. We said, “How can we do that? People are more important than horses.” And he said, “We need the horses to cart the corpses away.” (oral testimony of Fedir Wereteno)

The Soviets criminalized any mention of the famine and continued to officially deny its very existence until the 1980s, enabled all the while by the slavish gullibility of Western-press useful idiots such as The New York Times and The Nation. The most egregious offender and serial denier was Walter Duranty of the Times, who dismissed rumors of a Ukrainian famine as “mostly bunk” and pecked out this notorious line:

Conditions are bad, but there is no famine….But”to put it brutally”you can’t make an omelet without breaking eggs.

Well, and I guess you can’t mention Holocausts without mentioning Jews, either.

Yes, “Jews.” Put down your sandwiches and get ready to type, ye faceless keyboard warriors of the Taki commentariat!

Whether or not one views communism as a “Jewish ideology,” it’s undeniable that there was a drastic statistical overrepresentation of Jews in Russian Bolshevism, particularly in the NKVD police forces. Soviet Jews such as Lazar Kaganovich and Genrikh Yagoda are often fingered as the gleeful masterminds behind the murders of millions of Eastern European Christians. Is it possible they felt justified in striking back against centuries of pogroms and persecution? Ironically, Jewish Bolsheviks may have taught the Nazis a thing or two about the quarantining and mass murder of political, religious, and ethnic enemies.

Should it be a bloody thought crime to wonder whether beneath the surface ideologies of Russian Bolshevism and German National Socialism lurked a far more primal and utterly amoral ethnic power struggle between Europe’s Jewish and non-Jewish elites? Wouldn’t that be a far more reasonable and nuanced approach than the simplistic fairy tale of innate German evil versus compassionate Soviet heroism? Don’t loaded terms such as “anti-Semitism” imply a superhuman Jewish capacity to do no wrong? After all, the Russians won World War II”and, despite what Hollywood tells you, so did the Jews”and the winners always reserve the right to declare themselves the good guys rather than the more naked truth, which is that they were obviously the better killers. Or is all this simply too complex for the tribally wired human brain to grasp, and everyone should just shut up and pick sides?

To this day, you have hunchbacked dust mites such as Abe Foxman lecturing Ukrainian politicians not to draw false equivalencies between his people’s suffering and theirs. And thus the eternal status game of genocidal dick-sizing continues unhampered.

People can argue death tolls and intent and whether it’s nobler to kill people over class and ideological trifles than over ethnic competition, but one message emerges clearly from this blood-misted morass of death, misery, and denial: