Australia: Camp of the Ain’ts 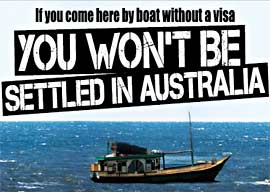 This country shall remain forever the home of the descendants of those people who came here in peace in order to establish in the South Seas an outpost of the British race.

But by 1975, that sort of Old World white-is-right attitude had been gradually chipped away by legislation and changing public sentiment. Australia’s Racial Discrimination Act made it illegal to so much as think of the word “coon.” Immigration laws, especially the parts with racial overtones, were relaxed to the point where roughly a quarter of the continent’s population is now foreign-born.

I’ve been to Australia once, when I visited Melbourne for about a week in 2006. It is quite the land of contrasts. Never have I seen a country where on one hand the media incessantly bombard your eardrums and eyeballs with multiculti propaganda, while on the other its denizens are so openly and unapologetically “racist,” you’d think you were at an Alabama Klan cupcake sale in the 1930s.

I arrived about a month after the Cronulla riots, which the locals told me resulted from the public’s impatience that hostile Lebanese immigrants were routinely raping white Australian women for sport. One Aussie told me of how packs of young Muslim male immigrants loved to taunt and intimidate the white natives. As we got out of his car to go into the post office, a group of brown males brushed past me, deliberately making eye contact and sneering.

I had dinner with a friend’s crisp and cordial parents, who were in their sixties and told me all about Australian football and how aboriginal art consists mainly of “dots…just dots.” I assumed through their tone that they felt all aborigines are retarded.

The next day as their son was motoring me around Melbourne, he made a passing comment about how there are barely 20 million people in Australia, but due north of them was a giant Asian continent teeming with about four billion residents. Although the statement itself was ominous, he didn’t seem paranoid to me…only concerned.

The White Australia Policy officially ended in 1973, which was the same year that Frenchman Jean Raspail published his dystopian novel The Camp of the Saints, in which a fatally tolerant and naively universalist French nation is swamped with a million starving boat people from India who proceed to eat the country until there’s nothing left. Raspail lamented that the West became ripe for plunder because it “has no soul left.”

I suspect that modern Australia may have a little bit of soul left.