Balancing California’s Budget Before it Falls Into the Ocean 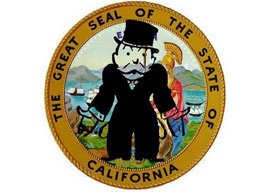 Two other measures may help tremendously. It is true that both are symbolic, but in this area symbolism is important. It is why, again for the purpose of browbeating Californians into voting for higher taxes, those branches of government that most directly affect most citizens (such as the parks and the DMV) are the first to be cut. So I offer these reforms in that spirit.

The first is a return to a part-time legislature. There is budding support for this idea, which would resurrect the state’s pre-1966 status quo. It would effectively abolish much of California’s political class. Opponents charge that the pre-1966 legislature was terribly corrupt. This may have been true, but the current one is not only corrupt, it’s far more expensive. Corruption in any legislative body is as endemic as sexual immorality in bordellos, but why should the public pay even more for it?

I also propose that we do away with salaries for public officials. While the idea was that salaries would open up governance to the less wealthy and make our rulership more purely meritocratic, this has not happened. If you cannot afford to buy an election, you wind up selling your soul to someone who can. Moreover, most people leave public office far wealthier than when they entered it. So why not at least do away with their salaries? Whatever we do, we shall have an oligarchy, but if candidates already have fortunes of their own, they may find the public coffers less tempting.

In such an arrangement, a high quotient of our lawmakers might then belong to such organizations as the Forest Landowners of California, the California Outdoor Heritage Alliance, the California Farm Bureau Federation, and the innumerable foundations, philanthropies, and “Friends of…” groups that the well-to-do tend to join in lieu of public service. The amount of real-world knowledge such types could bring to our governance might offset the gang of lobbyist magnets for whom we currently pay through the nose. At least they”d be cheaper.