Being Dishonest About Abe 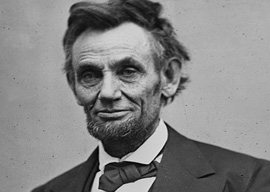 If the European franchises were still not universal in 1860, neither were they in many American states where suffrage was limited to white male property holders. I”m not saying this in a spirit of leftist condemnation. Extending the franchise has rarely increased the degree of self-government. It has usually produced the opposite result. Bloated voting rolls, especially those full of government workers, relief recipients, and those not rooted in established communities, have helped transfer power toward centralized bureaucratic administrations which are imagined to look out for the “people.”

Lincoln had claimed a right of secession in 1848 during the Mexican-American War, which he opposed as a freshman Whig congressman from Illinois. I”ve been told by neocon and other leftist acquaintances that Lincoln’s stand was OK because he opposed the war as the undertaking of Southern slaveholders, including then-President James Polk of Tennessee. Supposedly Lincoln took a strong stand against the war for immaculately progressive, abolitionist reasons. But there’s scant evidence for this. Lincoln attacked the conflict not as an opponent of slavery but because it was misrepresented by its government backers. It seemed to Lincoln and other war-dissenters that the federal government had bamboozled the public into the conflict with Mexico, from which it hoped to extract Western lands. Lincoln insisted that those states that opposed the war had the rights of nullification and secession. Presumably he changed his mind in 1861, when he ordered Union soldiers into Virginia, which had just seceded.

Guelzo conveniently omits from his narrative any account of the weakening of American self-government that resulted from the War Between the States. The Founders” entire system of shared sovereignty was irretrievably lost when the states were shown to be mere tributaries to the central government. Lincoln’s notion of “consolidated government” would prevail in the twentieth century, leading to a centralized bureaucratic-judicial dictatorship, punctuated by periodic plebiscites, under the federal government’s watchful eyes. It is not the neocons but the law professor Bruce Ackerman who tells us the truth about Lincoln’s victory, albeit from a predictably leftist perspective. The Union victory created the conditions for a “constitutional moment,” that is to say, for a constitutional revolution eventually leading to other twentieth-century regime changes. Lincoln did not save an already established constitutional government. The force of events and his desperate resolve to hold on to the seceded South buried the original constitutional design.

But to our hyper-modernists in the conservative movement and the GOP, none of this really matters. Now we have a large, well-equipped military to “liberate” other countries in the name of “democracy.” Our rulers also have at their disposal a vast administration to oversee our behavior and to keep us from discriminating against designated victim groups. And that administration also collects our earnings and gives us back part of them as “entitlements.” Isn”t that what democracy is about? Who the hell cares if the country was bled white in order to achieve it? It was not our pasty-faced neocon scribblers who died in the disasters they celebrate. Other Americans did so that new rulers could prosper. Like other regime changes, democratic ones were and are about the circulation of elites.