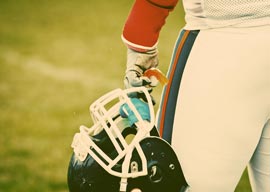 Instead, the 128 top-tier college football teams typically represent states, such as Missouri.

But players don”t have to be from the local turf. In fact, coaches are rewarded for recruiting distant stars. One of the paradoxical lessons of 20th-century spectator sports was that territorialism is such a powerful instinct that fans will accept ringers from anywhere in their hunger to see their home team win.

Yet high school football prospects tend to see themselves as defenders of the home ground, so they are much easier to recruit by colleges in their own region. It’s only natural: In virtually every culture, a large fraction of young men want to defend (and perhaps expand) the home turf. So high school football stars tend to stick fairly close to home.

Thus college football has some resemblance to the origins of European club soccer in that it grew from the grass roots instead of being imposed pre-designed by a league. On the other hand, while soccer was traditionally a working-class game self-organized by neighborhood males”and thus soccer fans continue to worry European elites as a potential source of populist resistance to open borders”American college football is very bourgeois. Only fans of televised golf skew more Republican than viewers of college football.

Now, though, the most gifted football players tend to be black. So a system inherited from the days of Frank Merriwell and Dink Stover at Yale that’s built around purported student-athletes doesn”t work very well.

In particular, because young women tend to like young men who are good at beating the other side, white coeds and black football stars are a combination that leads to a lot of rape charges. The U. of Missouri football program, for instance, is notorious for assigning jock-crazy coeds as tutors. The female prosecutor in Derrick Washington’s trial observed:

Too many tutors were having sex with the athletes…. The university has created this environment. When you put a room of athletes together with attractive girls, some of whom like to sleep with athletes, you are just asking for trouble. It creates a sexually charged environment, and athletes get an opinion of girls that is skewed…

Sexual assault of various flavors, such as teammates joining in or attacks on sleeping roommates, is a recurrent problem with college football. But because it’s largely a black vice, it’s hard for modern Americans to talk about”in contrast to the sins of Haven Monahan.

What can be done? Coaches in big-time college football will always have incentives to bring scary bad guys onto campus and connive to keep them there. Coach Pinkel at Missouri, for example, is paid $4.02 million per year to win.

After going 23″5 over the past two seasons, Pinkel is having a harder time of it this year, however, with his Tigers only 1″5 in the tough Southeastern Conference. That might be relevant to the threatened strike. “If we were 9″0, this wouldn”t be happening,” said one white player.

This Missouri strike is reflective of a general trend that’s beginning to show up in high school football: While football remains overwhelmingly popular as a spectator sport, it will likely fade as a participation sport. In California, a state that regularly contends with Florida and Texas for sending the most high school football players to the NFL, it’s starting to become a pattern for bad high school teams to forfeit the last few games of the season because they can”t get enough players to suit up.

Fans need to come to grips with the realization that big-time college football is going to downsize eventually. There are currently 128 FBS teams, four times as many as the NFL’s 32 pro teams. Reducing the number of teams that compete in the top tier from 128 to 64 wouldn”t eliminate college football’s problems, but would at least cut them in half.