Bile in the Blogosphere 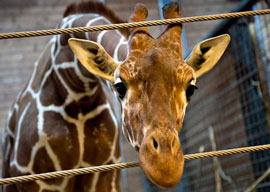 Bile in the blogosphere springs eternal because arguments go off so quickly at tangents and so give fresh cause for offense to someone. But the case of Marius was like fatty food to the gall bladder; it caused an outpouring second to none. The comments that follow online newspaper articles are often more revealing, at least to students of human nature, than the articles themselves. The Guardian recognizes this by often allowing the reader to skip the article altogether and go straight to the comments.

In the discussion following an article about the Marius case, however, the newspaper felt constrained on many occasions, even more than usual, to intervene:

A moderator removed this comment because it didn’t abide by our community standards. Replies may also be deleted.

Since comments such as “What an effing s.o.b. the zoo director is” passed muster, one can only conjecture what the impermissible comments must have been like.

But there were many comments intended to be constructive. Someone calling him or herself “yellowsnow” wrote to reply to the Danish zoo’s explanation that it had killed Marius to forestall inbreeding among giraffes in European zoos:

If the captive gene pool is so weak, then artificially inseminate from the wild population. It’s not rocket science.

To this suggestion, “Pinkythedolphin” answered:

Artificially inseminate from the wild population “ have you tried harvesting sperm from a wild giraffe? Rocket science might be easier.

Having expressed her disgust in no uncertain language, “ellatynemouth” said that she hoped people will boycott the zoo, to which “gavshaky” replied:

Yeah, boycott the zoo. I”m sure financial ruin…will be so beneficial for the rest of the animals living there.

And to another suggestion that the zoo be closed down, a correspondent wrote that the animals should be released into Denmark’s extensive jungles and savannahs.

Another reader worried that the lions to whom the carcass of Marius was fed might not have really liked the giraffe meat they were served. What was wrong with good old chicken? To this came the answer:

Yes, regularly wild lions hunt down the weak and young from the big herds of majestic chickens which roam the savannahs….

There were many charges of hypocrisy against those who criticized the Danish zoo. After all, Longleat (a stately home in England surrounded by a wildlife park) had recently put down several lions because they had become dangerous. To this, a reader replied with a question: Has anyone ever heard of a non-dangerous lion?

Actually, I have. Was it not Victor Mature who said, when it was proposed that he fight a lion in the film Samson and Delilah, that he didn”t want to be “gummed to death”? (The lion’s teeth had been pulled.)

Here, I think, is the way forward for zoos: edentulous lions with nasogastric tubes for nourishment by soy protein drinks. There would be no need, then, for the moderator to preserve community standards. They would preserve themselves.