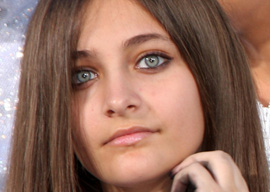 Paris Jackson, despite being half Paris Hilton’s age, appears to be far smarter. Jackson, 14, was recently interviewed by Oprah Winfrey, who in a bid to boost her failing network’s ratings has been getting exclusive interviews with famous kids such as Whitney Houston‘s daughter Bobbi Kristina Brown and the Kardashian clan. The Jackson interview revealed that despite all the madness surrounding the King of Pop throughout his life, Michael Jackson seems to have raised reasonably well-adjusted children. Although I didn”t see the entire interview, a brief clip of Oprah with half a dozen Jackson spawn casually gathered in Katherine Jackson’s garden painted a surprisingly pretty picture. The only obvious oddity is some of their names. Even Oprah had trouble with “Jermajesty.” What a Jermistake of a Jermoniker!

Paris is the most articulate and quite beautiful. Her brother Prince was nonplussed by Oprah, like any hormonal teenaged boy would be answering an adult’s intrusive questions. Blanket seemed uninterested in Oprah, too. The older kids, Michael’s nieces and nephews, were soft-spoken and all expressed interest in entertainment careers. They all say they want to sing or act, produce or direct. Paris is already starring in a film that comes out next year.

One might think these kids would be total freaks considering the sideshow that followed Michael Jackson, but I was struck by how nice and normal they all seem. Time will tell if they lead successful lives or if they become haunted by family demons and drug abuse. They will have a better chance outside of Hollywood or pursuing careers in traditional fields such as law or medicine, but that doesn”t look likely, especially now that Oprah Winfrey is exploiting them. Although they”ve cleared their father’s name with this interview, their grandfather still creeps the hell out of me. The eternally sleazy Joe Jackson was milling around during the taping with his pencil-thin mustache, looking like a cockroach.