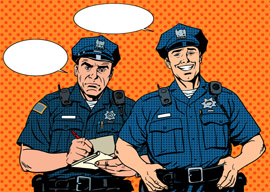 The cabbie waved to the cop and drove on.

“I know that cop; he’s an asshole. I didn”t mean to pull you, but he was starting to walk over.”

I looked at my savior. Oh, crap…a Muslim. Dave the noted GOP Islamophobe just got saved by a fucking Muzz. I expressed my gratitude, drunkenly and effusively. The young cabbie smiled.

“No problem, my friend. Why are you so troubled tonight?”

We sat in the Travelodge parking lot for a half hour, talking. He didn”t care about taking other fares, and he wouldn”t accept a dime from me. And I insisted, repeatedly”hell, I was going to pay him four times the fare. But he wouldn”t take it, no matter how hard I tried. He saw me get safely to my room and he drove off. Tariq Haroon; I”ll never forget his name. I thought about the irony of the evening: A law-and-order conservative hassled by a cop, a neocon polemicist saved by a kind Muslim who went the extra mile for a Jew-y stranger.

The next week, I took Tariq out to lunch to express my gratitude. I still try to keep him in mind when I find myself getting perhaps a tad too overreaching in my dislike of Islam. But what truly stayed with me after that night in El Segundo was the memory of the cop. He was clearly trying to entrap me, and just because I was too smart to fall for it doesn”t mean others in that situation wouldn”t have. And sure, even before my experience in El Segundo, I knew that cops could be the aggressors, the provocateurs, the jerks. But sometimes it takes a little personal experience to drive a point home. Prior to that night in 2009, I”d never had a negative interaction with a cop. Not once. So I”m glad I got to experience things from a different perspective, even if my “negative interaction” was extremely minor and, in the end, completely harmless.

Last year, after the arrest (and subsequent death) of black motorist Sandra Bland, officials released the transcript of her traffic stop, and it really struck a chord with me. Specifically the part where Trooper Brian Encinia clearly played the same type of “intent to stir shit up” word games that Salt-N-Pepa cop had tried on me:

Encinia: Hello, ma”am. We”re the Texas Highway Patrol and the reason for your stop is because you failed to signal the lane change. Do you have your driver’s license and registration with you? What’s wrong? How long have you been in Texas?

Encinia: Okay. Do you have a driver’s license? [Pause] Okay, where you headed to now? Give me a few minutes.

[Encinia returns to his car for several minutes, then approaches Bland again.]

Bland: I am. I really am. I feel like it’s crap what I”m getting a ticket for. I was getting out of your way. You were speeding up, tailing me, so I move over and you stop me. So yeah, I am a little irritated, but that doesn”t stop you from giving me a ticket, so [inaudible] ticket.

Encinia: Are you done?

Bland: You asked me what was wrong, now I told you.

Encinia: You mind putting out your cigarette, please? If you don”t mind?

Bland: I”m in my car, why do I have to put out my cigarette?

Encinia: Well, you can step on out now.

It was an ugly trick”purposely provoking her, repeatedly, to tell him “what’s wrong,” in order to use her quite reasonable response against her. Why ask if you don”t want to know the answer…unless the question itself is a trap. I don”t know how I would have felt about the Bland case had I not had my El Segundo experience, but I do know that the person I am today can”t view Encinia’s actions as anything other than disgusting and indefensible (and I”m hardly alone in that opinion).

I”m still inclined to be skeptical of claims made by someone named Diamond “Lavish” Reynolds, but I”m a bit less willing to dismiss her story out of hand. And while I”m not quite ready to agree with Dickens” Mr. Bumble that “the law is a ass,” I will admit that, to some extent, my eyes have been “opened by experience,” all thanks to the white city with the black cop who tried to trap the drunk Jew.