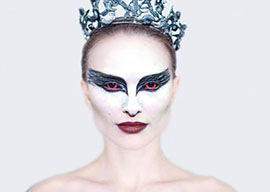 The Wrestler worked because 56-year-old Mickey Rourke was a natural star but a disaster at everything else. (Who else would quit Hollywood to become a professional boxer at age 38?) So it seemed fitting for Rourke to pump himself up dangerously on performance-enhancing drugs for one last great role in The Wrestler. That the actor, like his character, doesn”t have anything better to do with his life renders the sacrifices he makes for his art tragic but also cheering.

On the other hand, seeing Natalie Portman starve herself down to a ballerina’s gauntness to play a workaholic ingÃ©nue offers mostly conceptual satisfactions and actual irritations. In contrast to Rourke, Portman is a fine young lady who could do many worthy things with her life”except, perhaps, be a genuine movie star. Watching Portman act always sets me to musing about whether it’s not too late for her to become a pediatrician. Or like Shirley Temple Black, maybe she could serve her country as a charming diplomat.

In The Black Swan, Aronofsky relies to a striking extent on his actresses” public images to telegraph their motivations and excuse him from having to work on character development. For example, lovely Mila Kunis (That “70s Show and Forgetting Sarah Marshall) is, like Portman, a Jewish immigrant, so she’s vaguely thought of as a younger, funnier, and sexier version of Portman. Hence, in The Black Swan, Kunis plays a newcomer to the troupe who threatens to take Portman’s ballet role because she looks just like her yet is”who could have guessed?”younger, funnier, and sexier.

Similarly, there’s a puzzling scene in which Portman’s repressed dancer uncharacteristically steals the company’s outgoing prima ballerina’s jewelry, which seems to bring down a curse upon her. What’s the point? Well, the theft victim is played by Winona Ryder, whose own career”irony alert”has been cursed since her 2001 shoplifting arrest.

The Black Swan winds up more fun to compare and contrast than to watch.