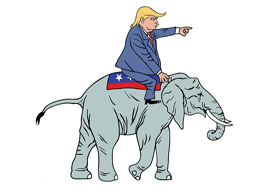 Yet, given the anti-interventionist and anti-war stance of Trump’s winning campaign, and of the Bernie Sanders campaign, U.S. involvement in Middle East wars seems less America’s future than it does her past.

After his 16 months in office, it appears as though the Trump presidency, no matter how brief, is going to be a watershed moment in U.S. and world history, and in the future of the GOP.

The world is changing. NATO and the EU are showing their age. Nationalism, populism and tribalism are pervasive on the Old Continent. And America’s willingness to bear the burden of Europe’s defense, as they ride virtually free, is visibly waning.

It is hard to see why or how Republicans are ever again going to be the Bush-Boehner party that preceded the rise of Trump.

What would be the argument for returning to a repudiated platform?

Trump not only defeated 16 Bush Republicans, he presented an agenda on immigration, border security, amnesty, intervention abroad, the Middle East, NAFTA, free trade, Putin and Russia that was a rejection of what the Bush-Boehner Party had stood for and what its presidential candidates in 2008 and 2012, John McCain and Mitt Romney, had run on.

If the Republican Party is “napping,” let it slumber on, undisturbed, for its time has come and gone. We are in a new world now.