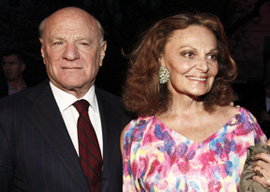 But to many, Brown has never been more than a glorified star-fucker. She got her start when she was 25 at Tatler, writing about the upper classes. At Vanity Fair she increased circulation and ad revenue but by accounts operated at a loss.

So where does this woman’s genius lie? It is doubtfully intellectual. She is rumored to have asked John Heilpern while editing Vanity Fair to jazz up a piece by Issac Bashevis Singer, winner of the 1978 Nobel Prize in Literature. Heilpern reportedly declined, saying, “I don”t jazz up Nobel Prize winners” work.” Allegedly Tina then said, “Who’s Issac Bashevis Singer?”

So what is it about Lady Evans, who has even received a CBE for her services to overseas journalism? Like most women in publishing, her expertise doesn”t necessarily extend beyond popular culture, celebrity, and Hollywood. She is rumored to have slept her way to Tatler by shacking up with Auberon Waugh, son of Evelyn, also known as Mr. Unfuckable! Brown made a success of Tatler by taking the low road with a rag that had previously catered exclusively to aristocrats.

After that S. I. Newhouse brought her in to revive Vanity Fair. People were impressed by Newhouse’s business acumen, for by using Tina he lit a fire under a staid and stale intellectual publication. But then it went too far and became little more than a somewhat more dignified People magazine. She is even said to have made deals with press agents, starting a trend which once was a huge no-no for bona fide journalists.

Now Tina Brown has managed to con a con man, getting Barry Diller to bankroll her using his stockholder’s money. He’s clearly having a bad year. As P. T. Barnum allegedly said, “There’s a sucker born every minute.” Beware, Barry! Boats and broads can break a bloke. Even one like you.