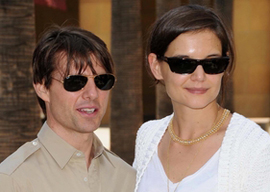 While this stuff will doubtless fill headlines until it sputters out, one may wonder why so many who are total strangers to the unhappy couple are so caught up in their doings”or those of so many actors and actresses in similar straits. After all, who cares if Tom is a perverse control freak hell-bent on offering up his daughter to a strange cult? Why should it matter if Katie is a calculating gold-digger who wants to ride the gravy train to the end? If either or neither of these views is correct, why should the great American public care?

Because TomKat, as so many other couples in their position, are an entertainment industry themselves. This is a couple whose entire lives are based primarily upon giving us a good time by temporarily making us forget our own lives. We watch the movies for this reason, and we develop opinions of these folk based purely upon the illusions that are cinema and television.

In that way, their private lives become as much our province as what we pay to go see at the theater. We form opinions based upon what we read or hear in the news, and we identify with one side or another based on that ignorance.

“I”ve always known that Katie Holmes just married him for his money!”

“I”m not surprised that she’s dumping him, considering what a weirdo he is!”

Just as in the movies, our emotions are stirred and our passions aroused for entirely artificial reasons. It may not mean anything, but it sure is fun! What gets lost in all this is a very real human tragedy. But their reality is secondary to our need for vicarious excitement.

So long as the problems of TomKat and their colleagues absorb our attention, we do not have to worry too much about the doings of the Supreme Court, the vagaries of the two parties and their politicians, and our slow slide to economic ruin. Given our general ignorance of such matters thanks to modern education, it probably is better that most of us concentrate on the Enquirer and People rather than The Economist or Current Events. After all, we can”t do any more about our rulers than we can about the Cruises”and the latter are more fun.