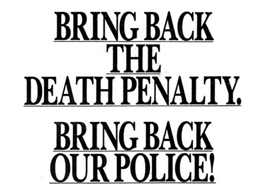 Burns has studied the trial transcripts so closely that she called the prosecutor by the wrong name in her op-ed. Far from trembling and afraid, as Burns imagines, the suspects were singing the rap song “Wild Thing” for hours in the precinct house, laughing and joking about raping the jogger. One of the attackers said, “It was fun.”

When a cop told Santana that he should have been out with a girlfriend rather than mugging people in Central Park, Santana responded, “I already got mines,” and laughed with another boy from the park. One of the youths arrested that night stated on videotape that he heard Santana and another boy laughing about “how they ‘made a woman bleed.’”

But none of that matters. Again, the victim was a privileged white woman (BAD!) and the perpetrators were youths of color (GOOD!). So the media lied and claimed the DNA evidence “exonerated” them.

This allegation was based on Matias Reyes’ confession to the attack. His DNA matched the unidentified DNA on the jogger—proving nothing, other than that he was the one who “got away.” He is also the “Rudy” who stole her Walkman, as Wise said at the time. Reyes admitted he took it. How did Wise know that?

A cellmate of Reyes claims he said that he heard a woman screaming in the park that night and ran to join in the rape.

The “exoneration” comes down to Reyes’ unsubstantiated claim that he acted alone. Years of careful investigation, videotaped confessions, witness statements, assembling evidence, trial by jury and repeated appeals—all that is nothing compared to the word of an upstanding citizen like Reyes, a violent psychopath who sexually assaulted his own mother and raped and murdered a pregnant woman while her children heard the attack through the bedroom door.

That’s the sum total of the “exoneration”: the word of a psycho.

Noticeably, Reyes faced absolutely no penalty for his confession—the statute of limitations had run out years earlier. Before he confessed, Reyes had been moved to Korey Wise’s cellblock. He requested a transfer on the grounds that he feared retaliation from Wise’s gang. All he had to do was confess—with no penalty—and announce that he acted alone. The Social Justice Warriors would take it from there.

Not even a monster’s self-serving “confession” can explain away the five attackers’ other crimes that night—vicious beatings that left one parkgoer unconscious and another permanently injured.

The SJW’s verdict: Award the criminals $41 million. Trump’s idea: Punish them. And you still can’t figure out how he became president.