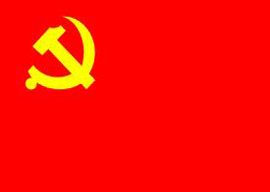 Forward another dozen years to 2001, when Gordon Chang brought out his book The Coming Collapse of China. Chang said it would all be over for the CCP in five years. (Ten years on, he’s still saying it.) As it happens, I spent the summer of 2001 in China with my family. I came back convinced that the Communist Party could go on indefinitely, and I wrote articles saying so. How come Gordon Chang’s speaking fees are so much higher than mine? It’s an unjust world all right.

And they’re still there. They’ll still be there next fall, though the lineup will have changed somewhat. Xi Jinping, second from the right in that photograph, will almost certainly take over the top spot from Hu Jintao. (The CCP, like our own beloved Republican Party, adheres to the next-in-line principle of leadership selection.) Whatever: There’ll be nine sixty-ish gents with dark blue suits, red ties, and engineering degrees.

Winston Smith in Nineteen Eighty-Four is told that the future will resemble a boot stamping on a human face forever. China’s future will be a well-polished pair of black Oxfords padding diffidently across the Great Hall of the People’s deep-pile carpets forever. The guys with the boots will be kept discreetly out of sight except when needed.

The Chinese Communist Party has it figured out. After 62 years of blunders, horrors, and reversals, they have pulled off a miracle of statecraft, a Staatskunst Wunder. With their 77 million members distributed in hundreds of thousands of cells, they have turned Lenin’s crude power cult into a robust, adaptable apparatus of total control that, like God in the universe, is everywhere present but nowhere visible—or is visible only, as with that photograph, in a form so bland the eye turns away in search of something recognizably human.

They have their placemen in every bank and company, every school and college, every church and drama club, every military unit and research institute. When the party says, “Jump!” the organization jumps, however “independent” it is in theory; as their banks jumped, against their better judgment, during 2009’s financial crisis.

The party has it all figured out. They will go on forever.