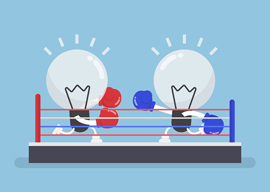 To me, an “ethicist” is merely a liberal arts grad who’s read enough philosophy books to be able to rationalize anything and make it sound brainy. And since I couldn”t get any of my contacts at CNN, like L.A.-based producer Paul Vercammen, to respond to my requests for comment, I decided to have a little fun with the “ethics experts.” I asked Ms. Lakshmanan,

The GIF, offensive though it may be, is nevertheless constitutionally-protected speech. From an ethics point-of-view, are you troubled that a mainstream news organization would seek the removal of online content (i.e., the removal of speech)?

A CNN spokesman told me the man’s safety was their concern, and that is an ethical reason to shield their identity.

See what she did there? CNN flatly stated that its reason for not identifying GIF Guy was that he removed the content, apologized, and promised to never upload such content again. It’s right there in black and white. But Lakshmanan ignores what CNN unambiguously said in favor of an alternate reason given to her by a source. By doing so, she can now pronounce CNN’s actions “ethical.”

All hail the mighty ethicist!

I then contacted Poynter big shot Al Tompkins, a friendly-enough fella who I”ve interviewed for this column on several previous occasions. I asked him the same question I put to Lakshmanan. His reply?

It seems as if in an attempt to be a “nice guy” CNN has taken some heat. It probably would have been cleaner for CNN to contact the guy and explain why they are unhappy. They could say what they wanted him to do. But leave it there. Don”t make the condition of if you don”t do what we say we will name you.

Oh Al, I love ya, man, but that’s some serious, I Am Sam-level “tardiness there. You admit that CNN put “conditions” on preserving GIF Guy’s anonymity, but then you claim that it’s only because CNN was trying to be a “nice guy.” Here we see the ethicist in his native habitat”a pasture full of cow shit. Tompkins avoided my question entirely, claiming that it would have been “cleaner” had CNN told the guy “what they wanted him to do” without putting conditions on it, whereas the actual ethical question is whether it’s proper for an organization like CNN to tell any private citizen to remove political speech, regardless of whether the demand is made gently and “cleanly” or forcefully and coercively.

Now, based on at least one of his other memes, GIF Guy might not actually be very Jew-friendly. That’s of absolutely no consequence to me. Check my birth certificate and passport; I”m not Canadian. I don”t believe in silencing people if their character is bad or their opinions ugly. CNN has effectively silenced GIF Guy, and no matter how the “ethicists” spin it, that’s inexcusable.

I was fortunate enough to outlive Irv Rubin and his cohorts. I truly hope I can live long enough to see the back of CNN as well. If those journalistic frauds are so fond of the JDL playbook, may they share the JDL’s fate.

And the sooner, the better.