Crossing Bridges on May Day 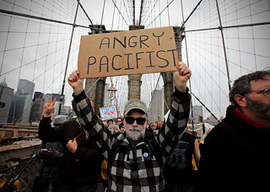 Around two in the afternoon I finally got to my office, where my punky 19-year-old intern from Staten Island helped me send out Andrew Breitbart “SO?” T-shirts we are selling for charity. I got into a minor argument with my coworkers about blowing off an entire day for all this crap. Then I headed to the Red Eye set.

When the cameras came on, we discussed the day’s OWS activities, specifically the young Ohio anarchists that were caught allegedly plotting to blow up a bridge. The kids were mocked as they should be. But I defended OWS in general and said we”re all ignoring the fact that terrorism works. In my homeland of Canada we still cower to French demands, and it all goes back to bombings the FLQ did in the 1960s.

I told the panelists that despite Breitbart’s screaming at OWS, he once confessed to me that he loved basking in their rage. He said, “I love these people” while undulating his arms like he was at a rave. He loved it because he believed yelling and arguing and getting your hands dirty is what brings people to the truth. The panel looked at me like I was mentally ill.

The further irony was I had to leave early to go to an OWS benefit called “99 Comedians for the 99%.” The crowd was treated to 99 comedians doing one-minute sets for the OWS legal defense fund.

My set was going well until I told the audience they would have loved Breitbart. They assumed I was joking and burst into hysterical laughter. “I”m not kidding,” I said sternly. “Sure he screamed at the OWS kids, but in a strange way he actually loved them.” As I tried to explain, the lights shut off and I was ushered off the stage. I had probably gone over my one-minute limit.

As I got off stage a comedian in a gray wig and ill-fitting suit said, “You weren”t kidding, right?” I said I wasn”t and he asked, “How old are you?” I told him I was 41 and he said, “I”m 37. I understand that he was probably an awesome guy. Kids today don”t get that. They can”t think outside the box.” We both agreed that we couldn”t think outside the box either at that age, but it’s the dogmatic youth who become the enlightened old dudes.