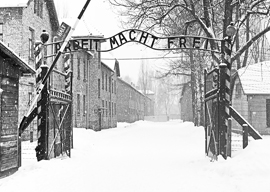 It’s surprisingly easy to get the leading lights of anti-denial to admit as much one-on-one. Rick Eaton has been the senior researcher at the Simon Wiesenthal Center for thirty years. He’s as major a player in the fight against Holocaust denial as anyone on earth. Two years ago, I corresponded with him (under a pseudonym, of course…he”d never speak directly with the likes of me!) regarding the Auschwitz problem. I explained my thesis to him, that Auschwitz, having various “issues” that call the credibility of extermination claims into question, should not be used to represent the Holocaust. He agreed, adding that “denying the Reinhard Camps and the Einsatzgruppen murders is likely too difficult to defend and Auschwitz is a lot easier to argue since there were multiple camps, slave labor used for weapons production, thousands of survivors and of course the 4 million number memorialized on a plaque at the camp, posted by the government and since removed.”

Of course, I couldn”t help but ask his opinion of the dreaded David Cole, who has on many occasions been labeled a “denier” by the Wiesenthal Center. Eaton’s take? “I”d have to go back in our files but I”m not sure he ever questioned the Reinhard Camps. I can”t find much of anything he ever said denying the Reinhard Camps. Nizkor has a 1995 piece they archived in which he ridiculed [Holocaust denier] Robert Faurisson for denying the homicidal meaning of Goebbels” March 27, 1942 diary entry.”

Well, at least privately they get it right. Buoyed by the confirmation that I”m not Satan, I expanded on my point about Auschwitz:

It seems to me that two-bit anti-Semite frauds can use Auschwitz to score points for total Holocaust denial because in the mind of the public, Auschwitz IS the totality of the Holocaust, and therefore, questions about past problems with Auschwitz are seen as problems with the Holocaust as a whole. As you pointed out, it’s “easier” to argue Auschwitz denial. But because of the tendency of scholars to (publicly) use Auschwitz to represent the totality of the Holocaust, it therefore becomes “easier” to deny the entire thing. It would be great if future generations, when encountering those who question Auschwitz in order to deny the Holocaust, could automatically respond by saying “but what about Treblinka and Sobibor and the Minsk Ghetto?” As you pointed out, deniers have a hard time dismissing those things…but the average person is usually not aware enough to bring them up.

Keep in mind that even though I was using a pseudonym, I was not falsely claiming to be anyone of note. In other words, Eaton made that admission to a complete nobody, a total stranger. One gets the feeling that many of these experts are secretly longing for the day when they can be open about the “Auschwitz problem” and move past it”robbing denial of its only legitimate point, and strengthening Holocaust history in the process.

The trailer for Denial contains this telling line: “Auschwitz is at the very center of Holocaust belief, so it’s at the very center of Holocaust denial.” In the film, and indeed in all of Lipstadt’s work, there is none of Eaton’s willingness to acknowledge that this is a problem. But it is. And a large one. Unfortunately, rather than honestly discussing the Auschwitz dilemma”yes, even at the risk of making a few potentially embarrassing admissions”mainstream Holocaust scholars prefer to scream “denier!” and perpetuate the Auschwitz-or-nothing myth. The mainstream press prefers this too. Since my public “outing,” every time a well-intentioned reporter has tried to give me the opportunity to explain my position, the piece has been killed in editorial. I am of greater value to the press as a sensationalistic monster, the “Jewish Holocaust denier,” a bugaboo to scare children and sell papers.

Of course, the actual deniers are the ones who profit most by the reluctance of those in the know, and those in the press, to honestly confront the problem of Auschwitz as “the very center of Holocaust belief.” Like parasites, the deniers thrive off the myth that Auschwitz is the totality of the Holocaust. It allows them to use my work while screaming, “Lookit the Jew who debunked the Hollycost!”

What needs to be debunked is “Auschwitz or nothing.” That, and that alone, will put a bullet in the brain of the denial zombie. And indeed it is high time to put the corpse of Holocaust denial where it belongs”six feet under. Sadly, those standing in the way of the burial include not only the zombie’s minions, but its supposed slayers as well.