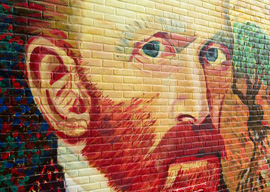 (3) The real story of “the guy who came up with a formula for altruism, then killed himself” is more complex than the veritable Ron Howard movie we”ve always been presented with.

Because of course it is. The impulse to conduct fantasy autopsies shrinks entire lives down to a round of Clue: It was King George, at Kew Palace, with porphyria.

Except, they now say, it wasn”t.

All this debunkery is unwelcome news for hacks who depend upon a deep well of ready-made human metaphors to dip into when crafting their mediocre poetry, motivational speeches, op-ed meditations upon the zeitgeist, master’s and doctoral theses, and, well, Ron Howard movies.

But of course, all these definitive theories and “last words” will one day give way under the weight of the next intellectual trend. Every new”God help us”Freud or Foucault always accessorizes his philosophy with the obligatory illustrative “case histories.” Doctrine via Madame Tussaud’s.

Ironically, only the very storied dead being played with and plied like Barbies have no say. Perhaps I”m just being quirkily scrupulous, but am I the only one who finds this biographical cannibalism if not morbid, then at the very least tastelessly presumptuous, like those creepy commercials in which the late Fred Astaire was manipulated into maneuvering a vacuum cleaner?

For over 150 years, one particularly popular exemplar was Phineas Gage. “Neuroscience’s most famous patient,” he survived a spike through the brain circa 1848, then lived on after death as symptom and symbol of something or other.