Doggie in the Gay Bar: A Christmas “Tail” 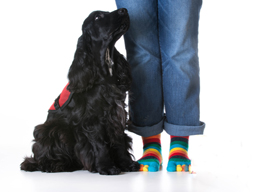 Gay bar owners who think this is nuts are correct. But guess what, my loafer-lightened amigos? This is exactly what you and your fellow alphabet-soupers are doing to the rest of us with your idiotic “bathroom laws.” In pushing for state and federal laws mandating that women’s bathrooms must be accessible to men who are “women on the inside,” you employ the same bureaucratic gobbledygook. “Don”t worry”these laws will only allow accessibility to men who are truly “trans.”“ But can a business owner ask for proof that a man is “truly trans”? “Oh shit no, guuurrrlfriend, that would be discrimination! You can”t grill someone about their gender identification; that’s an invasion of privacy!“

If LGBT advocacy groups have their way, the government will mandate that all men who are “trans” must be allowed into any public women’s restroom. At the same time, the government decrees it illegal to demand proof that a man is indeed “trans.” In other words, all men will be able to go into any public women’s restroom.

Same exact thing, same exact horseshit. Worse, it’s the same dishonesty. If you want all dogs to be able to go into all businesses, just say so. If you want all men to be able to go into all women’s bathrooms, just say so. But of course, such honest laws would be unpopular, so you just write them in a way that uses double-talk to hide the basic truth. Just like when California decriminalized medical marijuana but also allowed anyone to get a medical pot card for any reason. When we did that, we fucking legalized pot. We just didn”t want to come right out and say it, because we didn”t want to panic conservatives and religious types by admitting that we made the damn stuff legal. The recent ballot initiative that finally made all recreational pot use legal in this state did nothing more than end the baloney and bring a little honesty to the matter.

Don”t expect LGBTs to exhibit that level of honesty as they push their bathroom bills. And don”t expect them to be honest as they reassure the rest of us that no non-trans men will take advantage of the bathroom laws by lying about being trans just to gain access, while”at the same time”untold numbers of LGBT bar owners battle gays who take advantage of the ADA by lying about having a service dog just to gain access.

Mind you, the worst that can happen when some gay gent falsely claims that his perfectly coiffed poodle is a service dog is that other patrons become annoyed. On the other hand, letting any male perv into the ladies” room might result in women getting raped. That’s a bit more serious, but who cares, right? SJWs, and the government bureaucracy that loves them for all the new, expansive powers they push for, don”t care about such collateral damage.

So while I”m sympathetic to the plight of gay bar owners regarding the ADA on an intellectual level, emotionally I kind of like seeing them choke on the government flimflam they”re trying to force on the rest of us. Maybe that’s kind of a mean thing to say”but hey, it’s the end of December, that time of year when post-holiday stress tends to angry up the blood.

Hell, I could use a good stiff drink right about now, and where better to indulge than in my own home, where I can still regulate the presence of both dogs and trannies…at least for now.