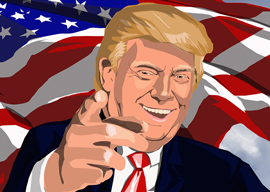 Let’s return to Davis. “The veterans stood stonefaced,” she claims. If you watch the video, you’ll see that there were three of them. The one on the right, Peter MacDonald, has a face that shifts from blank to anxious. Thomas Begay, the man in the middle, smiles happily the whole time, and later said he was not offended. Fleming Begaye, the man on the left, is difficult to read since we see him only from the side. He does anyway seem to look at the president with great seriousness, and perhaps some skepticism. Certainly, in any case, “stonefaced” is not an accurate description of all three men. Davis, of course, wants us to believe the experience humiliated them. That is palpably false. Besides, the motives of this long-discredited figure are far from admirable.

Thus, “he made the remarks,” she says, “while standing in front of a portrait of President Andrew Jackson—a favorite of Mr. Trump’s—who served as the nation’s seventh president and signed the Indian Removal Act of 1830, which resulted in the mass displacement and deaths of Native Americans often referred to as the Trail of Tears.” For globalist handmaidens, such historical details, although disingenuous, are indispensable. For, like Elizabeth Warren, with whom President Trump has long clashed, they don’t want a resurgence of American industry. After all, they would not benefit from that. Their solution to the work question is more entitlements. And by spreading feelings of resentment and grievance throughout the culture, the media helps to keep their democratic masters in power, because the people—blacks and women in particular—are duped into voting for the more harmful of the two business parties. Yet the massive national debt already finds us on an unsustainable course, you say? Why, yes, but as we are told in that edifying movie A Bronx Tale, “nobody cares.”

“The comment drew swift rebukes from Native American leaders,” Davis reports. “Russell Begaye, the president of the Navajo Nation, called the president’s mention of Pocahontas ‘derogatory’ and ‘disrespectful to Indian nations.’” Those nations lost, as it were, so Begaye’s resentment-driven words are understandable. In a delicious irony, one of Pocahontas’ actual descendants, Debbie “White Dove” Porreco, has said that she too is not offended by the president’s use of the name. Moreover, to her mind, “if Pocahontas were alive today, she would be very proud of President Trump. Just like Pocahontas was a heroine, Donald Trump is going to be our hero.”

This is not good news for progressives. They want us to feel endless guilt for history and for every little thing we do, as if their own pathetic slave nature should apply to everyone. In fact, some of us are strong. We will not degrade ourselves because of past events with which we had nothing to do. We also know that virtually all modern nations are founded on conquest, which is not only one of the principle themes of human history, but one with the nature of life itself on this violent and unforgiving planet. Long before a white face ever set foot on America, the native peoples had been at war, just like people everywhere else. Like slavery, which is universal, having existed on every continent, and still present in the Islamic world, war is the rule, not the exception, in human affairs. Most journalists, like the professors who trained them, now lack this historical sense. They live by ignorance, lies, and delusion.

A product of the ruthless New York City real estate world, President Trump is accustomed to and comfortable with conflict. That is a good thing, like the fact that he knows how to make money and that, like most politicians and indeed most people (just give them the opportunity), he is something of a shyster. As Socrates said long ago, good men don’t belong in politics. You may not like how that makes you feel, but wisdom is not determined by your feelings.