Don’t Fear the Robot: Why I Finally Joined Facebook 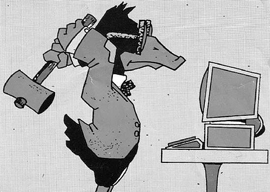 In Hodgkinson’s article, he claims Google uses “pawtracks” to tell big business about your search history. This is false. You only get cookies when you’re on a site that puts them there. They can only track your activity when you’re on their site and if you have a problem with that, you should only frequent restaurants where the waiters are blindfolded. The only way someone can see what sites you’ve been Googling is when they get on your computer and manually click the “history” button. The only entity with the authority to do this against your will is the government, and even they need a subpoena first. If you want to Google “how to murder your wife” and “tax evasion,” go bananas. But if you announce your affection for these topics on Facebook, that’s a different story. Only a mental defective would post something publicly like that and hope nobody noticed.

I don’t want to murder my wife, so I wouldn’t have a problem with Google selling my information even if they did. Although I found no hard evidence that Google sells your cookie history, their email service Gmail may be another story. Jezebel.com writer Tracie Morrissey was incensed by some ads in Gmail that told her where she could sell her engagement ring. She had been emailing a friend about a fight with her fiancé and a spambot picked up on it. I introduced Tracie to her fiancé and although I understand why she’d be frustrated with him, I didn’t know why she was mad at the robot. She was using Gmail’s software for free. In return, an algorithm tried to help her. Using someone else’s email technology is not our right and even if it was, being introduced to a vendor who wants to help wouldn’t count as a violation of that right.

Capitalism has such a bad rap these days, simply encouraging the invisible hand to merge supply with demand is seen as spooky. I like being target-marketed so much, it almost gives me a tingle. I have very esoteric tastes and have no problem watching businesses struggle to please me. I recently got some spam announcing the new GG Allin Throbblehead dolls are out. Thank you for that. I’m one of the 37 people in the world who wants one. Do you care that the new Bad Brains documentary is debuting at SXSW? No? OK, well, we won’t waste your time with announcements about it. Targeted marketing is showing you something you might like while you look at other stuff you like, for free. FOR FREE! When I go to Taki’s Mag I see my own face advertising a porn domain. That’s not sinister. It’s amusing.

While Tom Hodgkinson plays his vinyl records in private and swears they sound better than MP3s, I took Andrew Breitbart’s advice and subscribed to Spotify, where a seemingly infinite number of songs appear every time I type something in the search bar. If I feel inclined, I can have the songs I listen to appear on Facebook. Right now I’m listening to Nicki Minaj and I don’t want anyone to know that, so I clicked the “private session” button. I want Facebook to register my choices and I want it to tell me if a band I listen to a lot is releasing a box set. I use Facebook to check in on old friends, hear about things I might want to buy, and even—brace yourself—sell stuff. If they think they can turn a profit by documenting this harmless behavior, they are obligated to do so.

The privacy backlash at Facebook isn’t about big business violating our rights. It’s about a nation of spoiled brats so used to getting something for free, they think it’s their inalienable right. I wish they would direct their anger at the government, which is working hard to not only monitor our behavior but restrict it.

Companies that try to sell you something aren’t trying to ruin your life. They’re trying to enrich it. Entrepreneurs create jobs and make our lives better. They are the reason the average lifespan has been climbing steadily since we began recording it. Billionaires shouldn’t disgust you; they should inspire you. Two-thirds of them started out with nothing. The billions that Facebook is making came out of nothing. The world is moving forward no matter what, and the Luddites can either come aboard or get the hell out of the way.